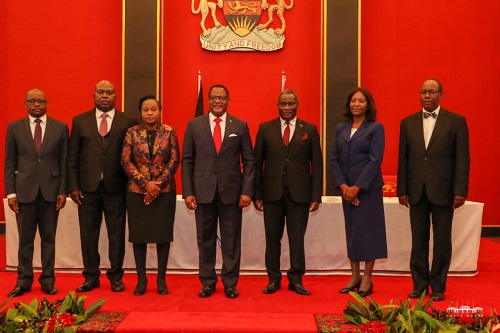 Malawi President Dr. Lazarus Chakwera has promised that his administration will not interfere with the judiciary. The President made the remarks during the swearing-in ceremony of the newly appointed Justices of Appeal yesterday at Kamuzu Palace in the Capital Lilongwe.

The Malawi leader noted that there has been a heavy assault on the independence of Supreme Courts worldwide over the past 5 years, a situation he noted threatens to undermine the rule of law.

The President then said that the above background shows that the work of a Supreme Court Justice is not for the faint-hearted, but for the brave and just thereby encouraging the newly sworn-in Justices to have the courage of letting nothing but the Constitution move them in their determinations on the bench.

The President then assured the Malawi Judiciary that he will promote its independence and not put spanners on its work.

“So long as I am President, you will never hear me say anything to the public against a decision you make from the bench, even when that decision is unfavourable to my Administration. While the Malawian people are free to express their views on any of your rulings, which is important to maintain public trust in the accountability of the Judiciary as a public institution funded by taxpayers, I believe that my unique responsibility as President is to always promote and protect the independence of your court, and on that you have my word.”