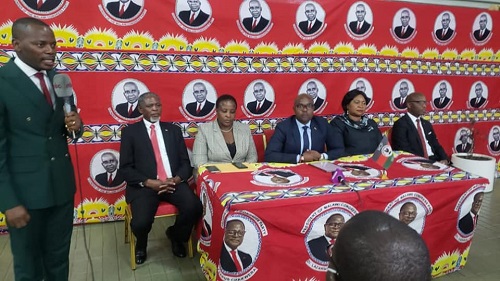 In light of the revelations of the contents of the Tonse Alliance by Vice President Saulos Chilima yesterday that they agreed that the main alliance partners, Lazarus Chakwera and Saulos Chilima will support each other to rule one term each, the Malawi Congress Party (MCP) has come in the open to say that they are not in possession of any document to the extent that there will be rotational Presidency as Chilima asserted.

This was disclosed in a response press conference addressed by MCP Secretary General Eisenhower Mkaka and other senior MCP officials at the party’s headquarters in the capital Lilongwe yesterday.

“Meanwhile from where we stand, the Malawi Congress Party does not have, in its possession, any document that stipulates of or points to the sharing of terms between Dr Lazarus McCarthy Chakwera and Dr Saulos Klaus Chilima.

“In any case, as a law abiding Party, we will comply with the dictates of the supreme laws of the land which is our Republican Constitution,” said Mkaka.

The MCP Secretary General said his party is committed to uphold and promote the values and objectives upon which Tonse Alliance was founded. He stated that they would be discussing the matter in their next alliance partners meeting.

“It is our hope that during that meeting, a common position on the resolutions reached collectively will be communicated to the public in the interest of advancing transparency, respecting the spirit of shared responsibility in which the Tonse Alliance was formed, and upholding our promise to keep the alliance focused on serving Malawians without regard to political interests,” he said.

In the meantime, the alliance partners have made their own reactions with respect to Chilima’s remarks.

“What the Vice-President said can’t hold because it is MCP which was registered for the Presidential election. We have to know what our Constitution says; whatever our people or political parties agree outside the Constitution, doesn’t have any impact. So, he [Chilima] is simply displaying, sorry to say, his ignorance of the law.

On his part,  People’s Party spokesperson Ackson Kalaile concured with Katsonga saying “there is no any law in the country that supersedes the Constitution.”

“It’s difficult to comment because we need to go back to the law whether the Constitution allows that an alliance once dissolved, the government also falls.

“The alliances that we have in Malawi do not have legal binding like in other countries such as Kenya, so implementing to dissolve a government as suggested would be difficult.

“I think this should be a wake-up call to relook at our laws to allow alliances as political entities when we go to the elections.”

Kamuzu Chibambo, Petra President said “Let MCP come out and talk. I think that way we will be bringing better context to this whole debate.”

“I think what we need is just an emergency meeting as an alliance to figure out what to do, because I don’t know anything and I was just shocked to hear that statement.

“As you can see, they were having meetings behind our backs, so we are all in the dark. We went into the alliance because we thought our manifesto would be taken aboard. We didn’t really understand what was going on so at least the Vice-President has clarified the issues we all wanted to hear, so it’s up to the two of them to figure out how we will move forward and what our role is.”