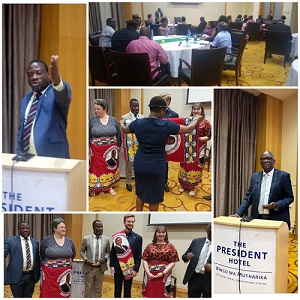 The friendship between the country’s liberation party, the Malawi Congress Party (MCP), and the conservative party of the United Kingdom has been strengthened following the workshop in the capital Lilongwe the two parties had to interface as part of their efforts to strengthen the ties recently.

Making his statement at the conclusion of the three-day workshop, the First National Deputy Campaign Director for MCP, George Zulu, said that the session had strengthened the sisterhood that the two parties have enjoyed since their founding years.

“When you go back also pass our word of gratitude for this gesture, as a sister party, we are so thankful.

“We have covered a lot of topics here and when you go home, train your fellow members so that the knowledge which you have gotten here, you have to impart to other members so that we attract more people to vote for Malawi Congress Party,” said Zulu while being grateful to President Lazarus Chakwera in his capacity as President of MCP for allowing the training to take place.

On his part, Second National Deputy Campaign Director for MCP, Ashems Songwe said the workshop was a success and will help his party to strategize to win again in the next elections.

“A lot of infrastructure that you see here in Malawi was built under the Malawi Congress Party of the late Dr. Hastings Kamuzu Banda. Since 1994 as a nation, we have retrogressed significantly, and it is only now that we are getting back on track as more infrastructure projects are being rolled out across the country. As you will be returning, we want you to convey to the leadership of the Conservative Party that Malawi Congress Party is indeed so grateful.

“You have stood with us in times of need, and now we are in government and you are still standing with us, we believe this sisterhood can get better when both of us continue to be in government.”

In her remarks, one of the Conservative Party representatives, Laura said as they go back to the UK, they expect a great positive outcome from the participants after undergoing successful training.

The Malawi Congress Party and the Conservative Party signed a Memorandum of Understanding (MOU) in 2018 as both parties were going to polls in 2019.

Conservative Party which is a ruling party in the United Kingdom under premier Rishi Sunak is one of the two major parties in the country (UK) with 356 MPs, alongside the Labour which has 196 MPs.  Conservative Party has made the history of being in power for 65 nonconsecutive years and has since been referred to as one of the most successful political parties in the Western World since its formation in 1834 from the Tory Party.