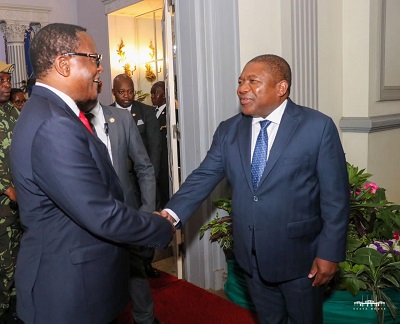 Malawi is hosting Region 5 Youth games in the capital Lilongwe. President Chakwera was entitled to single-handedly open the start of the games which have drawn participants from 12 countries. Instead, he invited his neighboring Mozambican President Filipe Nyusi to witness the launch, and his brother President indeed attended the function in the capital Lilongwe yesterday.

The regional 5 youth games were important, but they weren’t everything. When the Mozambican President was leaving the nation for his own at Kamuzu International Airport, the epitome of Chakwera’s diplomacy was for all to appreciate.

Speaking to the media on Saturday at Kamuzu International Airport, Nyusi pledged that his administration would work to ensure that procedures for allowing Malawi to import fuel through Mozambican ports were expedited in order to help Malawi effectively address the recent fuel shortages that had hit the nation.

Nyusi also said that during his visit, the two presidents spoke about energy difficulties and, among other things, how Mozambique should speed up the delivery of fertilizer from the ports of Beira and Nacala to Malawi.

The Mozambican President praised Malawi for hosting the Region 5 Youth Games and said that despite economic challenges being experienced by many nations, Malawi did not use this as an excuse to stop investing in young people.

We thank President Chakwera for keeping good connections with his neighbors unlike in the past. President Nyusi’s visit and his favorable vibes toward Malawi simply demonstrate to Malawi that no man is an island indeed.