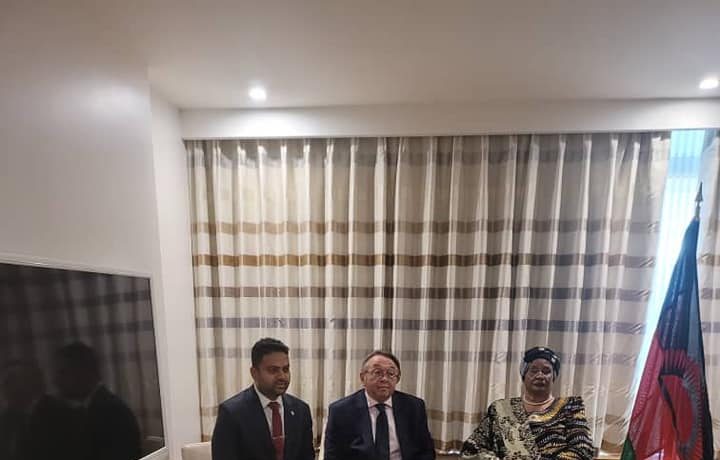 LILONGWE-(ShireTimes)-In an effort to support President Lazarus Chakwera’s efforts to mitigate the effects of and recover from the current economic crisis, former President Joyce Banda, who is currently in the UK for the funeral of Her Majesty Queen Elizabeth II, has taken advantage of the trip to explore opportunities for Malawi.

Writing on her official facebook page, the former President says just like her government solved similar problems facing the country now such as shortage of fuel, forex, and persistent blackouts, with good collaboration among different sectors the situation can be reversed for the better.

Banda states that together “we can begin the journey of easing the situation” while acknowledging that the underlying causes are distinct from those of 2012 crisis.

Banda is presumably pleading with the public to take responsibility for the process and refrain from playing the blame game, which is primarily driven by UTM supporters led by Saulos Klaus Chilima.

“In 2012 I started by ORGANISING the NATIONAL DIALOGUE ON THE ECONOMY resulting in priotizing Energy, Agriculture, Mining, Infrastructure and Tourism. Inspite of all challenges, records show that 2013/14 the economy grew by 6.2% as opposed to 2% 2011/12. This is recorded.

“Here we are, just like all countries of the world, passing through this economic crisis. I believe we can still look at traditional and non-traditional paths on our way to economic recovery. This is imperative,” Banda writes.

The former President had a meeting with Bird & Bird where she explored trade opportunities in agricultural produce and learned lessons from what our neighbouring countries are doing to boost their export base.

“I am insisting that we must as a nation dive deep into bringing Investors to Malawi. Being a business person in export, I am convinced that Trade rather than Aid is a viable option that cannot be ignored. We could bring into Malawi a lot of forex that our government so desperately needs.

“I have found that there is too much opportunity for us to export especially agricultural produce. Our next door neighbor Zambia are exporting a lot of poultry products to Dubai Including Zinzili. They are exporting avocados. We must add value yes but initially can we please do this. Urgently! It is very easy. Kenyans are even exporting mbuzi slaughtered next to the airport in Nairobi,” she challenges.

According to her statement, later she had a meeting with the Former Minister of Transport of the UK Paul Clark who is now Patron of the World Humanitarian Drive, who was accompanied by the founder of the organisation.

The organization nodded to Banda’s invitation to work in Malawi.

Considering that Malawi is slowly going towards Mining due to the discovery of some precious minerals, Banda also had discussions with the President of Tanzania President Samia Suluhu Hassan to learn more about their mining sector.

“As we already know, we have just learned officially that we are rich due to the discovery that we have the largest deposits of Rutile in the World. We can draw lessons from Tanzania.

“What the Magufuli govt did to make sure that outsiders do not take advantage of their mining industry. She has offered Malawi joint meetings in this regard. I will leave it to the President to take this offer or not,” said Banda.

Banda, who is the founder and leader of the Tonse Alliance partner, the People’s Party (PP), has been in different countries exploring opportunities for the country.

In a related development, President Lazarus McCarthy Chakwera has touted Malawi as the best destination for agricultural investment.

The President was addressing the Nuveen Agricultural Investors at the Business Council for International Understanding (BCIU) in New York, USA. Nuveen is an American asset manager responsible for 1.2 trillion dollars’ worth of assets under the parentage of TIAA.

In his address, Chakwera said that expecting Ukraine, which is at war with Russia, to be the world’s food basket, was an indictment of the world’s failure to leverage Africa’s potential to be the major food producer

He, therefore, challenged the gathering to consider investing in Africa because of its vast land and freshwater resources.

“And in that regard, I invite you to start with Malawi, home to one of the largest freshwater lakes in the world,” said Chakwera.

Chilima and his supporters are occupied with political maneuvering while upsetting the government system through their proxies in the public sector, rather than contributing to the solution of the crisis, which has affected every nation.

Chilima is also suspected to have solicited bribes from corrupt businessman Zuneth Sattar.

Meanwhile, he is also alleged to have approved US$312 thousand bill for his wife’s medical trip to South Africa, with many describing the amount as excessive.

Mary Chilima, wife to Vice President Saulos Chilima, is expected travel to South Africa for medical procedure and the vice president’s office came up with a K311.98 million (about US$312,000) budget for the trip.