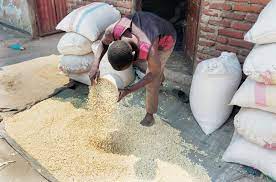 The Government through the Minister of Agriculture Lobin Lowe has today announced 2022 minimum farm-gate prices.

These are basic prices for farm produce available at the farm, excluding any separately billed transport or delivery charge.

The farm gate prices are set as farmers have been continuously complaining of exploitation by some unscrupulous individuals that flock farming communities and buy farm produce at very low prices.

The farm-gate price for soya beans is K480 per kg and K700 per kg is for polished rice while unpolished rice will be sold at a minimum price of K300 per kg.

The prices have been increased by 30 percent compared to the 2021 farm gate.

“When coming up with the prices, a mark of 30 percent to 2021 prices has been factored in on top of production costs and market forces. I would like to warn that the law will go after those who will be found exploiting farmers through buying their produce at very low prices,” said Lowe.

Lowe also warned that foreigners are not allowed to buy the produce from farmers and that buyers will only be those with licenses.

Lowe was accompanied by officers from Malawi Police Service who have pledged to ensure strict adherence and enforcement to this year’s announced farm-gate prices for the country’s farmers.

In a related development, Minister of Agriculture Lobin Lowe has disclosed that his ministry is engaging wheat farmers on the possibility of investing in the crop for local consumption and export.

Malawi has recently been hit by low supply of wheat due to the ongoing conflict between Ukraine and Russia as the two countries are the major exporters of the crop into Malawi.

Speaking during an inspection tour of crops by President Lazarus Chakwera in some central region districts, the minister said Malawi needs to utilize the available irrigation schemes in boosting production of the crop locally.