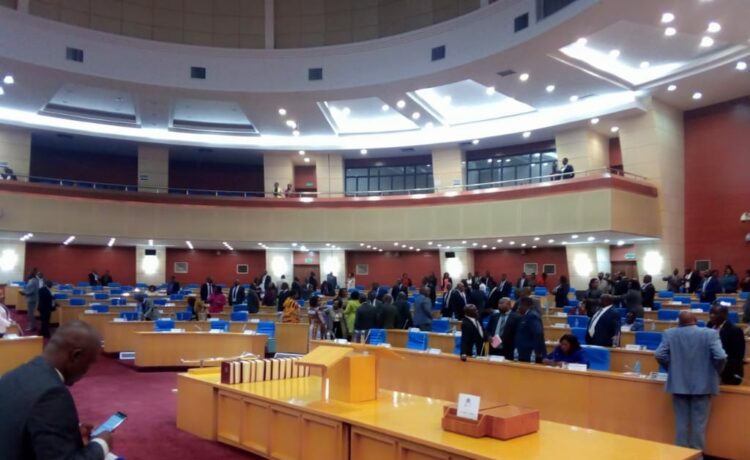 Bedlam in Malawi parley as leader of opposition accused of “Ph.D.” shopping
0Share

LILONGWE-Leader of Opposition in Parliament, Kondwani Nankhumwa, faced a humiliation today in the august house as leader of the house Richard Chimwendo Banda questioned his academic qualifications, the Ph.D. in particular, which Chimwendo alleged was acquired within two months.

In normal circumstances, one must undergo at least a three-year period of study to acquire a Ph.D., which is research-based.

Nankhumwa ignited the fury when he accused the Tonse Alliance government of failing to address social-economic challenges affecting Malawians.

In adjournment formalities, Nakhumwa said Malawi has missed the way to Canaan with the economy shrinking.

He said President Lazarus Chakwera is being wasteful with frequent travels.

“If he is not on the road, then he is in the sky,” says Nankhumwa.

He also condemned the President for failing to appoint new cabinet ministers on seats that have been vacant for so long.

Nankhumwa went further to condemn Chakwera for citing Global trends and Covid19 for his failures.

Reacting, Chimwendo Banda said government has made achievements on construction of houses for security agencies and ensuring food security.

While accusing Nankhumwa of stealing a Malawi School Certificate of Education (MSCE) Chimwendo asked Nankhumwa to go back to school and stop finger-pointing others.

Nankhumwa’s academic journey has been a topic of discussion following allegations that he used a fake primary school certificate to enroll in secondary school.

Unidentified man in Mulanje, where Nankhumwa also comes from, produced an audio clip in which he claimed that Kondwani Nankhumwa, then Minister of Local Government, used his late brother’s identity.

The man said Nankhumwa did not have a certificate of education of his own and that is why he stole the identity of his brother.

According to the man, Nakhumwa’s real name is George Malemia but Nankhumwa said all the four names are his.