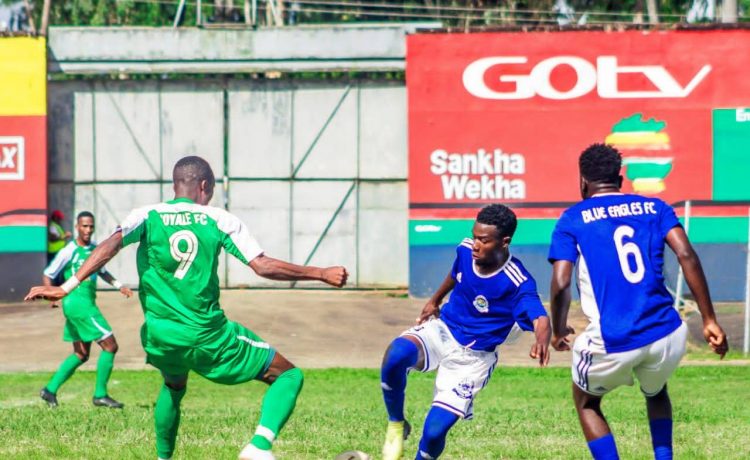 Blue Eagles have taken the 2022 TNM Super League by storm having won their first three games despite facing some tricky fixtures along the way.

The Malawi Police Headquarters based team  beat Moyale Barracks 1-0 on Saturday at Mzuzu stadium with a 90th minute goal by Chikondi Mvula, making them the only team with maximum points after three matches and leading the league with nine points.

This is a big change in fortunes for the Area 30 side who struggled in the 2021 season having just survived on the last day of the season.

But with new bloom at the helm of their coaching panel, Elia Kananji, this promises to be another season where Blue Eagles will push the other usual title contenders to the wire with their impressive early form.

Meanwhile another team that has taken Malawi soccer fraternity by surprise this season is Dedza Young Dynamos who are seating pretty on second position unbeaten after defeating Kamuzu Barracks 2-1 on Sunday.

Goals from Henry Misinjo and Charles Chipala were enough for the minnows to complete a comeback win after Horace Mchoma had given the visiting soldiers an early lead at Balaka Stadium.

The newcomers are level on points with Red Lions who drop to third because of a superior goal difference.

The Zomba based Soldiers beat MAFCO at Civo Stadium 2-0 on Saturday through Chikoti Chirwa and Ronald Pangani.

Defending Champions Nyasa Big Bullets who were on bye last week after contributing more player to under-23 squad which had some international engagements, eased past Ekwendeni Hammers 3-1 at Kamuzu stadium in Blantyre on Saturday afternoon.

Macfallen Mgwira, Babatunde Adepoju and Hassan Kajoke made sure the ‘peoples team’ maintain their 100 percent start with two wins from two and sitting on 4th position with 6 points and a game in hand.

Joseph Mbewe provided the consolation for Ekwendeni, who on Sunday failed to bounce back against newly promoted Sable Farming as the two teams played out a one all draw at Mulanje Park Stadium.

Emmanuel Lino equalized early in the second half for Sable after Wongani Lungu had given the visiting team the lead late in the first half.

The result means Sable are on position 13 with 2 points from 3 games whilst Hammers have now 5 points from 4 games and are position 6.

In the Lilongwe derby, Silver Strikers were held 1-1 by their rivals Civil United with Chawanangwa Kaonga scoring for the bankers while Patrick Phiri scored for Civo in a highly contested game played at Silver Stadium on Sunday.

The result does not bode well for the two teams as they have both accumulated just 4 points from 3 games with Civo in 8th while Silver Strikers lie in 10th.

Sandwiched in between the two in 9th position is struggling Mighty Wanderers who could only manage a scoreless draw against Mighty Tigers at Mpira Stadium.

Three weeks into the league, things are not rosy for Rumphi United as they are yet to register a point and are bottom on 16th position, while Mafco and TN Stars have a point each sitting on 14th and 15th positions respectively.