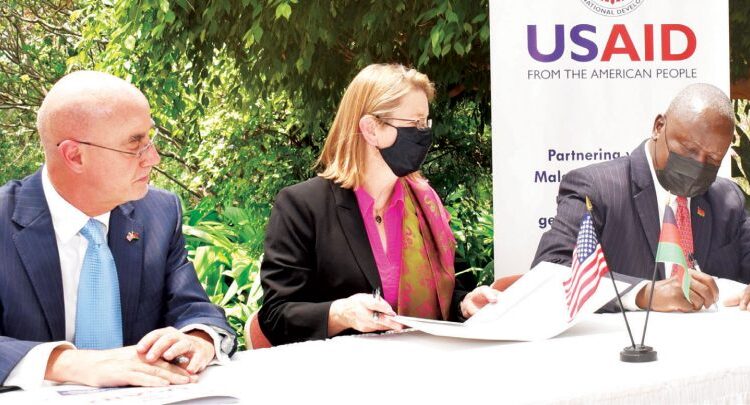 During the signing ceremony which took place at the outgoing US Ambassador’s in Lilongwe, residence, Robert Scott, the outgoing Ambassador said that more than $200 million would be channeled, through United States Agency for International Development (USaid), to development projects annually. The grant will run from 2021 to 2025.

“Our signing today marks an extraordinary sign of the mutual commitment of the US and Malawian governments to advance shared development objectives that benefit the Malawian people,” Scott said.

“Our commitment means that more adolescent girls will be able to go to secondary schools in their communities. It means that more citizens will have the information and access they need to demand better services from their local governments. It means that farmers with profitable, resilient livelihoods can better address climate stresses. And it means that healthcare workers are better equipped to meet the next pandemic when it comes,” Scott added.

The US engaged with its key government partners before the agreement was reached. These included the National Planning Council, the National Aids Commission and ministries of Health; Education; Forestry and Natural Resources; Agriculture and Food Security; Tourism and Wildlife; Gender and Social Welfare; Finance; and Local Government.

“Through their robust consultations, USaid and the Government of Malawi agreed to heighten their coordination on a range of developing projects. These projects will empower Malawian youths to lead healthy, informed and productive lives; strengthen the public sector’s accountability and effectiveness and accelerate and sustain inclusive development for the country,” Scott said.

“You have supported us during some of the difficult times in our history as a country. We have known, and we know, the US as a very generous people and we are most grateful for that,” Mlusu said.

“We, as a government, have an idea of where we want to take this country in terms of development. These ideas are clearly outlined in Malawi 2063 and other policy documents which we have prepared. However, these nicely prepared plans remain unimplemented and are just filed away as we wait for funds,” he said.