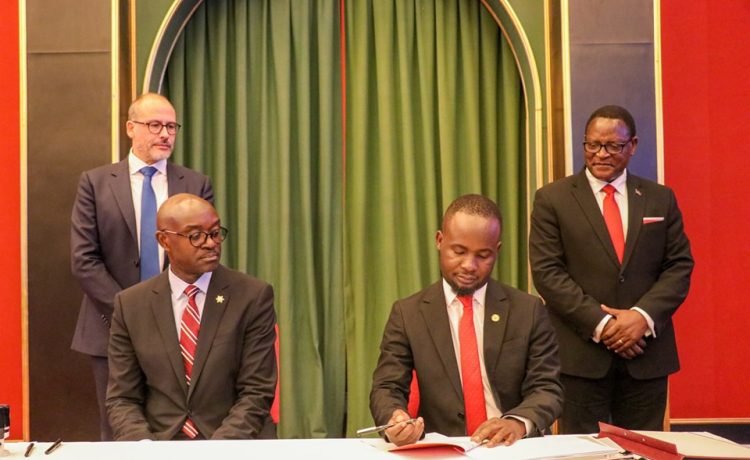 On Monday 28th November, 2022, the Malawi Government and Bridgin Foundation signed a $6.8 billion (about 7 Trillion Malawi Kwacha) financing agreement meant to be splashed on various educational, health and agricultural projects in Malawi.

During a budget consultation session that took place today (11th January 2023) at Bingu International Convention Centre (BICC) in Lilongwe, a contributor made remarks suggesting that the money “that was obtained from the Bridgin Foundation has not been put to good use in the national budget” and requested for measures that would safeguard 2023/24 budget to avoid funds mishaps.

Responding to the contributor, the Finance Minister asserted that “kulibe amene anasayinila kuti kwabwera ndalama $6.8 billion [there is no one who signed for the receipt of the money, $6.8 billion]…, that’s just nonsense. The real issues are the ones we are talking about [referring to other contributions on budget]”.

Reporting on the remarks, Nkhoma Synod Radio social media page inaccurately quoted Gwengwe by claiming that he said “kulibe yemwe anasayina K7 trillion ndi Bridgin Foundation”. Following this misquote, a substantive section of the general public has been thrown into a skewed understanding of Gwengwe’s remarks which are, truthfully, highlighting that no one has, yet, signed for the receipt of the money, entailing that the money is not yet paid into Government hence cannot form part of any equation auditing the flow of the current budget.

While on one hand Minister Gwengwe made a statement that “there is no one who signed that the money has been received from the Bridgin Foundation,” and on the other hand Nkhoma Synod Radio reported a quote that “kulibe yemwe anasayina K7 trillion ndi Bridgin Foundation,” the two statements are clearly coming out with different colours, texture, density and meaning.

The reporting by Nkhoma appears to suggests that there is nothing like a signed agreement with Bridgin Foundation that ever took place. Since the nation witnessed the signing ceremony that really took place on 28th November last year as was widely reported, it would be a total surprise if the Minister was to claim there wasn’t a signing of the funding agreement with Bridgin. But that, as it has been shown above, is not what the Finance Minister has said.

The statement from the Minister clearly touches on the actual in-flow of the money as having not taken place yet hence no one has signed its receipt. On that premise, holding the Government to account on the money that has not been received is what the Minister referred to as “nonsense”. The Minister further maintains that there is a funding agreement that had been signed between Malawi and Bridgin Foundation notwithstanding that the funding is yet to be received.

To contextualise Gwengwe’s remarks with the occasion (which was budget consultation), no instant cash has come in to cushion the country’s budget deficit, hence his remarks that as a country we must engineer our means of funding our national budget.

An outline of some of the infrastructure projects under the agreement between Malawi and Bridgin Foundation includes;

2- Kamuzu University Teaching Hospital in Blantyre with satellites in Mangochi, Lilongwe and Mzuzu.

4- Mzuzu University Teaching, Learning and Research Facilities for geo-mining and the establishment of a business park.

5- Malawi University of Science and Technology High-tech and Engineering hub.

7- Development of Power generation facilities with a total installed capacity of 1000 megawatts and upgrading of the current electricity transmission infrastructure.