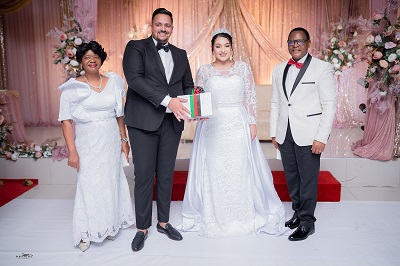 If one believes in destiny, the late Sidik Mia comes across as one of the destiny helpers of President Lazarus Chakwera. When the going was getting tough coupled with the inadequacy of funds to match the liquidity of the former ruling Democratic Progressive Party (DPP), Mia came in to put a new lease of life on the MCP with his money such that MCP was seen to be a worthy competitor of the DPP. Despite not realizing his dream of becoming the Vice President of the country, the late Mia, undeniably so, left an indelible mark as far as turning the fortunes of the MCP was anything to go by.

As we all know, Mia succumbed to Covid-19 at the peak of the pandemic in Malawi. However, it appears he made a brotherly bond with President Chakwera, a bond which appears to have transcended politics. This is evidenced by the wedding of the late Mia’s daughter, Sauda to Khan, a wedding which took place at the sun n sand holiday resort in Mangochi recently.

“I would like to express my sincere gratitude to the President of the Republic of Malawi, His Excellency, Dr. Lazarus McCarthy Chakwera, and the First Lady, Madam Monica Chakwera, for gracing us with their presence at the wedding of my daughter Sauda to Nabeel at the Sun n Sand Holiday Resort in Mangochi over the festive season,” wrote Abida Mia on her Facebook page.

“Their presence was a demonstration of the profound connection His Excellency shared with my late husband, Sidik Mia. Theirs was a friendship that transcended politics and endures with my family, who regard his Excellency as a father figure, as mentioned by my son Abdul Wahab in his wedding speech.”

“To our mother, former President Joyce Banda, and Retired Chief Justice, Richard Banda, I hereby express my heartfelt appreciation for sharing this special occasion with us. To all fellow Cabinet Ministers and Members of Parliament thank you so much we value your support.”

Mia then thanked all family friends “who traveled from near and far” saying that “we will always cherish the wonderful memories.”