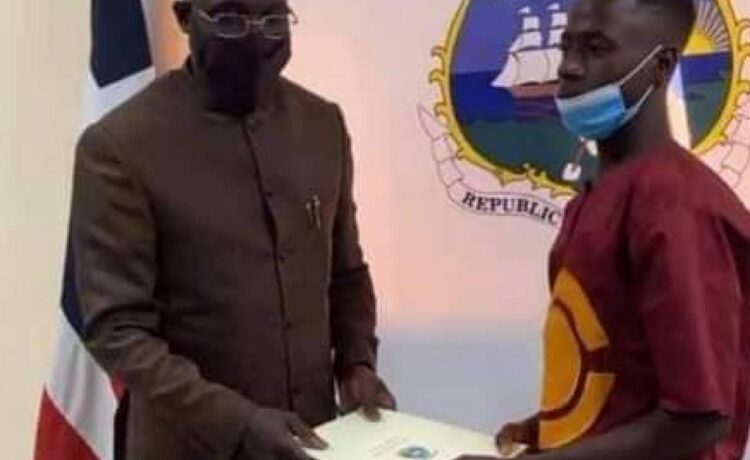 Nineteen-year-old Emmanuel Tuloe’s act of honesty – returning US$50,000 he found along the road side to the rightful owner – has landed him a golden opportunity – a meeting with President George Weah, scholarship that covers his current 7th grade tuition up to master level and US$10,000.

The President also awarded Tuloe, a motorcyclist in Nimba County, two motorbikes. He will serve as an anti-corruption ambassador and earn a monthly salary.

Tuloe was escorted to President Weah by the leadership of the Nimba County legislative caucus on Monday upon the President’s request.

According to President Weah, he was marveled by the 19-year-old’s sincerity, especially in a dwindling economy.

Pres. Weah: “I am made to understand that you are in the 7th grade with no money to continue your education; that you have no means of income except to occasionally borrow a motorbike from one of your friends when he is off-duty in order to earn a few dollars to sustain yourself”.

“You are a Champion, Emmanuel, and we are all very proud of you. Although it is often said that virtue is its own reward, I believe that you should be additionally rewarded for this virtuous act, which brought miraculous rescue and relief to a hardworking businesswoman.”

President Weah admonished other well-meaning Liberians to not only emulate Tuloe, but to also award him for “making Liberia proud”.

Speaking to reporters after the meeting with the President, emotional Tuloe said upon returning the money, his friends began to bully him and called him “stupid”. He said, some said he is going to be poor forever.

“Since my decision, when I have a breakdown on the highway and some of my rider friends see me, they don’t help; they say I acted stupid to find and return money. I should let the money help me,” he said.

“My parents thought me not to steal and return what does not belong to me,” he said. He added that, “What if I had not returned that money, who knows what would have happened to me.”

He expressed gratitude to Pres. Weah for the gesture.

The 19-year-old school dropout last Tuesday while driving his motorcycle on a highway saw a bunch of money wrapped in a plastic bag that had dropped unnoticed.

When he saw the money on Tuesday, he said “I was afraid because it was plenty; and so I brought it home and gave it to my aunty to keep until the owner could ask for it.”

That day, Musu Yancy, the businesswoman who had lost the money, went on the radio “crying for her money and appealing to anyone finding it,” he said. So he took it to her.