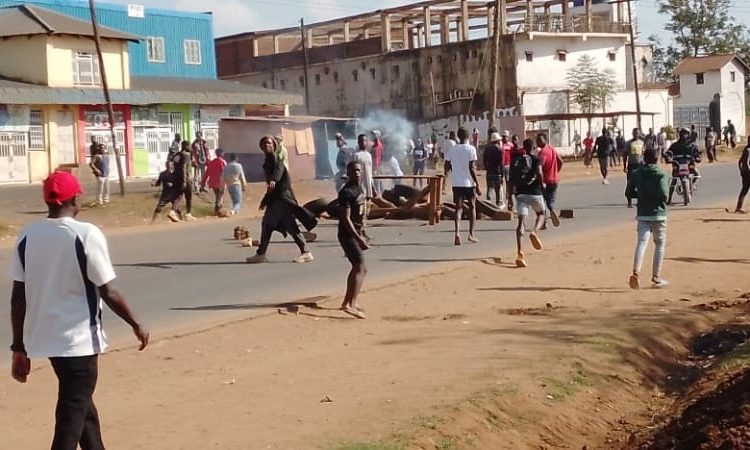 The Malawi Human Rights Ambassadors, in an apparent response to embattled former President Peter Mutharika’s call for violence, proceeded to stage protests in the capital Lilongwe on Wednesday, despite being prohibited by the courts via an injunction filed by some parties.

The protests were in response to what the organizers called the judiciary’s “selective justice.”

The judiciary’s selective justice theme was spread remotely via social media by their South African-based Malawi member of the group, Ben Longwe, who urged Malawians to take to the streets to protest.

The police stepped in to implement the order for the demonstrations to be shut off, causing mayhem as running skirmishes between demonstrators and police shooting teargas at them erupted. Because the police were overpowered, the protestors went on a rampage and looted shops, making the protest unpleasant.

Hastings Chigalu, a Lilongwe Police spokesperson, said that over 40 protestors are in police custody and will be charged with contempt of court and unlawful assembly.

Chigalu, for his part, has denied claims that a police officer was slain during the protests.

Longwe, whose detractors claim is a Democratic Progressive Party (DPP) operative, is reported to be working for the opposition party to destabilize the Chakwera administration.

Billy Banda of Malawi Watch, who was very vocal during the Joyce Banda regime, is one of the beneficiaries of the ousted corrupt DPP.

Recently he released an audio suggesting that Mutharika should come back to power.

Banda further bashed Leader of Opposition for going against Mutharika.

The protests happened barely a few days after Munthalika made careless remarks at a press briefing in Mangochi, suggesting that the Lomwe people should not be held accountable for crimes they committed.

The former head of state has a history of making comments that exacerbate racial tensions in the nation.

The most recent remarks were made after investigations revealed him as a person of interest in the Killing of Albinos in the country.

However, there are protests from many other Lhomwe people who believe the former president is exploiting the ethnic group for his political aspirations.

Meanwhile, in the northern part of Malawi, some Malawians led by former Vice President Khumbo Kachali have gathered at Zolozolo cemetery to memorialize the deaths of roughly 20 people slain by the state during anti-governance mass rallies on a day like today in 2011.