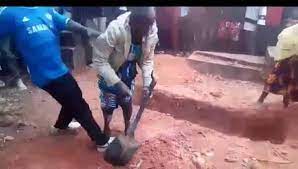 There is palpable fear that has gripped the family of Christina Mphande, an elderly woman who was heavily and shamelessly assaulted by communities on witchcraft allegations in Mzimba district.

The woman was inhumanely treated as evidenced by the raining of the blows which forced her to fall into a grave where she was forced to bury her daughter in law.  The bone of contention was that Christina Mphande was accused of bewitching her daughter in law who died in South Africa. During burial time, the woman who was heavily assaulted on these accusations was forced to bury the dead body at Eswazini in Mzimba.

A video showing the horrendous act of beating and raining heavy brows on the helpless woman forcing her to fall into the grave she was forced to fill circulated on the social media sending shock-waves to most well-meaning Malawians. This development moved the Malawi Police to effect arrests on the 20 people in connection with the unleashing of this act of indignity on the woman. Fearing for her life, Mphande went into hiding.

In an interview with the local media from her hiding place, Mphande said she is afraid of going back to her the village as angry communities are baying for her blood following the arrest of the said twenty people by the Malawi police.

As almost all elderly citizens residing in rural areas of Malawi are struck by poverty hence are of insufficient means, Mphande is not exceptional, such that she has asked well-wishers to build her a house and help her access medical attention following the impact that was caused after she fell in the graveyard and the subsequent losing of her two teeth.

In the meantime, Rev. William Tembo, General Secretary for the CCAP Synod of Livingstonia has appealed to government to ensure that deliberate policies are put in place to protect the elderly in the country.

Meanwhile, Timothy Mtambo, Minister of Civic education and National Unity has condemned the current wave of mob violence against the elderly on allegations of witchcraft.

Malawi is a country which is always awash with such developments of the elderly in this country being victimized to the point of burning or bludgeoning them to death in the most horrendous way possible especially on accusations of witchcraft. Neno in the Southern region is one case in point where such things have always been prevalent.