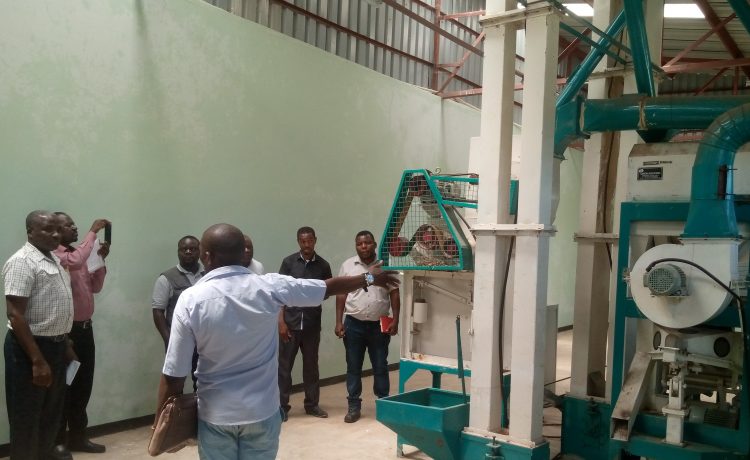 Government through the Presidential Delivery Unit (PDU) has tasked the department of building to expedite the process of assessing the multi million kwacha Mphinga Value Addition Centre in Senior Chief Wasambo in Karonga district.

Director of Irrigation Services in the Ministry of Agriculture engineer Geoffrey Mamba made the assurance on Wednesday when the PDU team led by deputy director Kumbukani Ng’ambi made an impromptu visit at the K273 million African Development Bank funded plant to appreciate reasons why it is not operational fours year since it was completed.

In an interview, Mamba noted that it was sad to note that the plant had stayed idle for years, saying the department of building will reassess the building’s cables and wiring system for the value addition rice cleaning, processing and grading machine to be operational.

He said: “This project is an element of the project’s three components through Smallholder Irrigation and Value Addition (SHIVA) that include the 300 hectares scheme where farmers cultivate rice, the agro-processing facility for value addition for them to get more money and capacity building.

“So, the main challenge is that the facility is not yet connected to power because ESCOM failed to connect power because of the incompatibility of the cables that were used. Therefore, government has mobilised the team through PDU to assess the situation to find a solution quickly.”

“The visit by the PDU team has rekindled our hope for the facility otherwise unscrupulous vendors have been buying from us at very low prices. And again, for the four years that we have been waiting for power, we have spent about K4.5 million on salaries for two security guards,” he said.

However, there was no immediate comment from ESCOM as the power utility body’s spokesperson Innocent Chitosi could not answer his phone after several attempts.

Earlier on in the day, the PDU which aims at accelerating the implementation of key promises the Tonse Alliance administration made inspected the proposed site for Ilola-Nthola irrigation scheme to appreciate the project which will be implemented by the Green Belt Authority (GBA).