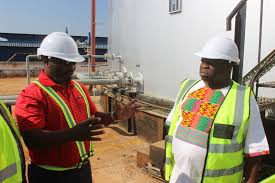 Meanwhile, as investigations continue to roll, it has been discovered that Oryx Energies bought residential flats for the embattled National Oil Company (Nocma) CEO, Gift Dulla, before  being suspended from the state-owned company.

The flats which are valued at US$3.5 million (approximately MK30 billion) are located in Ibex Hill, Kingsland Area in Lusaka Zambia.

On 18th August this year, and again on 1st July, Shire Times revealed two fuel suppliers at Nocma: Trafigura and Oryx as being centers of looting machinations that took place at the National Oil Company of Malawi (Nocma). We indicated that Trafigura and Oryx and two corruption cobweb backbone at the energy sector in which corrupt politicians were cutting their deals via their agents disguised as employees at Nocma.

Our revelations resulted into, or were at least followed by, an arrest of three high profile politicians namely Newton Kambara (who was Minister of Energy at the time), Mr. Chris Chaima Banda (who was Presidential Aide at the time) and Mr. Enock Chihana (a leader of Aford which is one of the alliance partners in the incumbent administration).

Trailing this high profile arrest, the law enforcement agents also arrested Nocma’s CEO, Gift Dulla, and the company’s Director of Finance, Richard Milanzi, all of whom were subsequently suspended from Nocma. The two, who are still on suspension, were arrested on allegations of fraud and abuse of office in which, among other mischiefs, they allegedly unlawfully created a parallel bank account that was used by Nocma in channeling funds to the then ruling DPP.

Oryx Energies is a Swiss group of companies which has spread itself across 17 countries in sub-Saharan Africa alone including Malawi and Zambia. Its so-claimed reputation of a reliable business entity has been tested negative in Malawi since the era of DPP where its supply contracts at Nocma were embroiled in corruption and bribes, a legacy that has been nipped by the new administration.