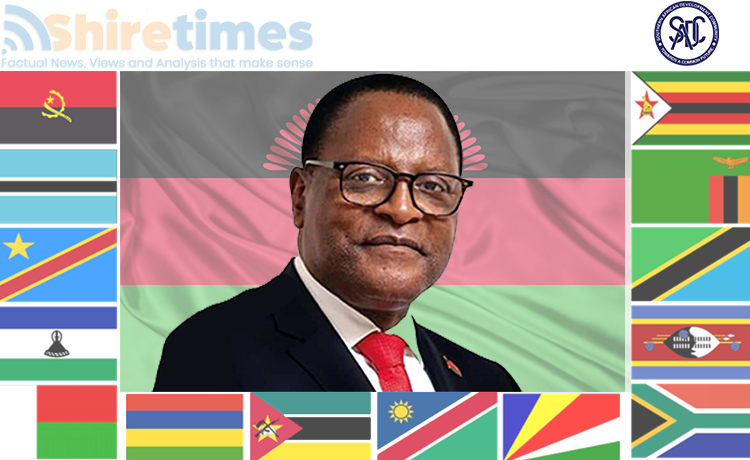 President of Malawi Lazarus Chakwera is the Chair of SADC
0Share

When I returned home from the United States, where I was pursuing my Postgraduate studies, I had to befriend a taxi driver for convenient movements for I did not have a car of my own. He was always a call away. Though at times when I needed him I would have to wait a bit longer as he would be in transit commuting other clients, I was comfortable with the business relationship established between us and I could not worry waiting mostly.

A few months later I secured my own car and his services became obsolete to me. We cut ties for a while until my memories of him were refreshed with a call. All the stories and jokes we used to share came to mind. I cordially greeted him just as we used to. He sounded indifferent. That is when I toned down and contracted my big smile. He begun to speak; “boss, business is hard. Can you believe at this hour nobody has called me nor linked me for any business?” It was around 5Pm. He continues to narrate the extent of the problem in the industry by quoting a friend of his who used to transport tourists from the airport to different hotels around Lilongwe and even to as far as Salima and Mangochi.

He said that for that month that friend of his did not transport anyone from the airport. “Boss”, he beckoned my response “Fridays used to be busy, transporting people from parties and to different clubs. I would go home knackered in the mornings on Saturday. These days I knock off around 6Pm to just go home and sleep after waiting for customers in vain. It’s hard!”

I attested of the impact of COVID-19 on the hospitality industry. Skies are clear from the fumes of planes. The resounding reality is so real you can hardly hear sounds of flying planes. Restaurants and hotels have become empty halls only occupied by furnishes. You could hear an echo if you whispered.

However, that there is an upcoming international event in Malawi, is an opportunity for the industry to get some consolation. The value chain offers jobs to taxi drivers, restaurants, artisans, hotels, lodges and the spillover effects on household and national economy.

Malawi is hosting the 41st SADC ordinary Heads of State Summit for about ten days from 9th to 18th of August 2021. As the regional policy-making institution, SADC is managed on a troika system that comprises the current SADC chairperson, the incoming chairperson and the immediate previous or outgoing chairperson. Previously, current troika members comprising of Mozambican President Filipe Nyusi, the current SADC chairperson, former SADC chair, Tanzania’s President Samia Suluhu Hassan, and the incoming chair, Malawi’s President Lazarus Chakwera convened for an extraordinary Heads of State summit in Maputo Mozambique on 23rd June 2021. Only troika members attended the extraordinary summit of which this year was a double troika having up to 6 member states. The ordinary summit is the one that comprises of all member states in SADC.

Southern African Development Community (SADC) is an organisation of 16 Member States established in 1980. The mission of SADC is to promote sustainable and equitable economic growth and socio-economic development through efficient, productive systems, deeper cooperation and integration, good governance and durable peace and security; so that the region emerges as a competitive and effective player in international relations and the world economy. Member States are Angola, Botswana, Comoros, Democratic Republic of Congo, Eswatini, Lesotho, Madagascar, Malawi, Mauritius, Mozambique, Namibia Seychelles, South Africa, Tanzania, Zambia and Zimbabwe. The SADC Summit is responsible for the overall policy direction and control of functions of the community, ultimately making it the policy-making institution of SADC.

Usually when Heads of States travel to a country, they go with them official states aides, ministers and other delegates from different government arms of Ministries, Departments and Agencies (MDAs). Therefore for 16 Heads of States convening to Lilongwe implies that there is a score of individuals coming along with them. In essence, that implies millions of dollars being pumped into the economy.

Using the five-star hotel such as The Presidential Warmont Hotel as an example, it will cost a single individual about US$250 per day for accommodation and food. If each President comes to the summit with at least 10 delegates, revenue of up to US$37,500 will be collected for lodging alone per day, which will translate to US$375,000 in 10 days.

These individuals would want to hire cars and at times treat themselves to leisure. Hiring a chauffeur driven car may cost them a minimum of US$50 per day therefore for 150 delegates, if there were to individually higher cars, would translate USto $75,000 for merely 10 days. Obviously, the guests will not arrive and leave the same day of the start and end of the summit. Therefore, the actual days are 12 assuming that some of them may not want to extend their holiday to tour Malawi. In that case, approximately US$75,000 more will be injected into the economy for lodging and accommodation and an extra US$15,000 for transportation. Further to that, the guests may have an interest in purchasing souvenirs whose estimates we may not quantify. There is, therefore, at least US$540,000 cash that is expended to flow into the economy. This a bare minimum calculation but the fact is that cashflow will be in millions of dollars.

Apart from the delegates, entrepreneurs with investment interests may also take opportunity of the summit to come to Malawi. Let’s estimate them to at least 10. That will translate to an incoming cash of US$36,000 for lodging and transport for 12 days. Therefore, the projected total revenue could, in that sense, be US$576,000.

While there are prospects of the hospitality industry to get consoled, some quarters are murmuring on why the Malawi government has budgets MK59 Million (US$73,000) for this summit. This is an amount of money that would, given the minimum prospects above, be pumped back into the economy barely within 2 days of the summit. By the tenth day, different stakeholders of the economy would have benefitted from the event and the government would have itself gained from tax receivables to the tune of US$86,000 (MK69 Million) assuming that hospitality industries operate at a 50 percent profit margin.

At that computation, it means the government would have generated a profit of about MK10 Million in ten days. But that is only at the lowest possibility. It is strange, therefore, to read such murmurings which vindicate ignorance of economic impact such an opportunity brings to a country. Imagine complaining when the MK59 Million investment will be recovered with a profit of MK10 Million? Why is there a murmuring when businesses and individuals will amass profits to a minimum of around MK163 Million? Pure ignorance and, perhaps, misuse of the right to hold an economic opinion.

Parting note is that the budgeted money is not only for decoration of Lilongwe city and other activities related to the summit but also temporary rehabilitation of the M1 road stretching from the Airport junction through Kanengo. The public may also wish to know that this road is earmarked for reconstruction into a double lane road in the 2021/2022 budget as the President Lazarus Chakwera had promised to do so.

I will not be surprised when my taxi driver friend will call me at least by the 18th to tell me how business has suddenly picked up.