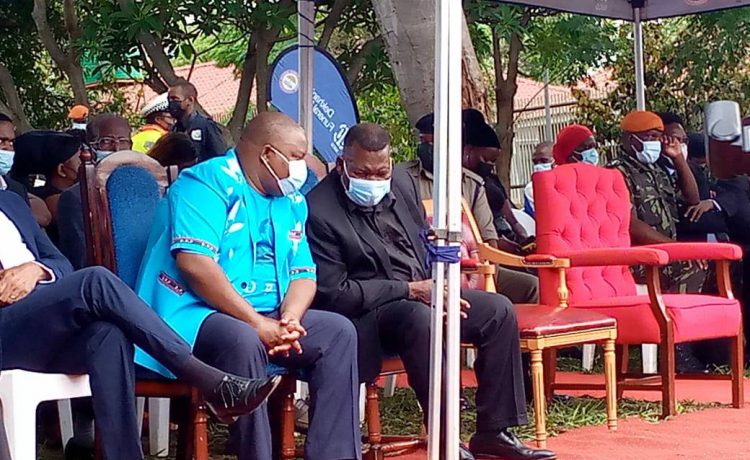 Hon. George Chaponda and Leader of Opposition Kondwani Nankhumwa at the funeral
0Share

Erstwhile Malawi leader Arthur Peter Mutharika has said he will not be present for the funeral of former first lady Annie Chiudzira Muluzi—and provided no reason—but, a socio-commentator has said it could be because he still has not come to terms with his defeat to President Lazarus Chakwera during the 2020 June 23 fresh presidential polls.

Instead, Chakwera has delegated George Chaponda – a former minister who battled the ‘maize-gate’ scandal – to represent him as Democratic Progressive Party (DPP) president and the party during the function.

A communique signed by Shadric Namalomba, the party’s spokesman, did not disclose reasons for Mutharika’s unavailability at the function but further indicated that Gertrude Mutharika—the erstwhile first lady—will represent the former president and the Mutharika family.

Reads the communique in part: “The Former President, His Excellency Professor Arthur Mutharika, will not be able to travel to Lilongwe for the funeral of former First Lady Madame Annie Muluzi on 6th January 2022. Hon. George Chaponda, MP will represent the DPP President and the Democratic Progressive Party.”

A Mzuzu Socio-political commentator Jackson Msiska said much as Mutharika could have valid reasons for not attending the funeral service, it painted a bad picture of him especially him being the immediate past father-figure.

“It does not reflect well on him on the umunthu aspect. Atupele had to leave his sick mother in Kenya just to join him at the DPP-United Democratic Front (UDF) rally. Dr. Bakili Muluzi had to leave his BCA abode to celebrate with him at Mlakho wa Alhomwe in Mulanje not long ago. And he chooses not to be with them during their difficult moments. Where is umunthu in this?” wondered Msiska.

Msiska also said Mutharika’s gesture showed his “intolerance”, saying it meant he was not yet able to agree that he had lost the election.

“There are going to be politicians from across the block including President Lazarus Chakwera who has already confirmed his attendance and defeated him in the June 23, 2020 fresh presidential polls. I am sure even the Leader of Opposition Kondwani Nankhumwa whom he is now in leadership battles with will be present.

“So, for him not to attend the function will show that he is intolerant and has not accepted that he lost, and that others should lead. It paints a very gloomy picture for someone who calls himself a democrat. He should have swallowed his pride,” Msiska said.

Annie Chiudzira Muluzi died at Aga Khan Hospital in Nairobi, Kenya on Tuesday, December, 28, 2021 after a long battle with cancer.

Her remains arrived at around 09:00 hours through Kamuzu International Airport on Tuesday, January 3, 2021, and then taken to Area 3 Muluzi residence for vigil.

A statement from the office of the president and cabinet signed by secretary Zangazanga Chikhosi said on Wednesday January, 5 2022 the funeral cortege will depart Area 3 for Msinja in Malingunde.