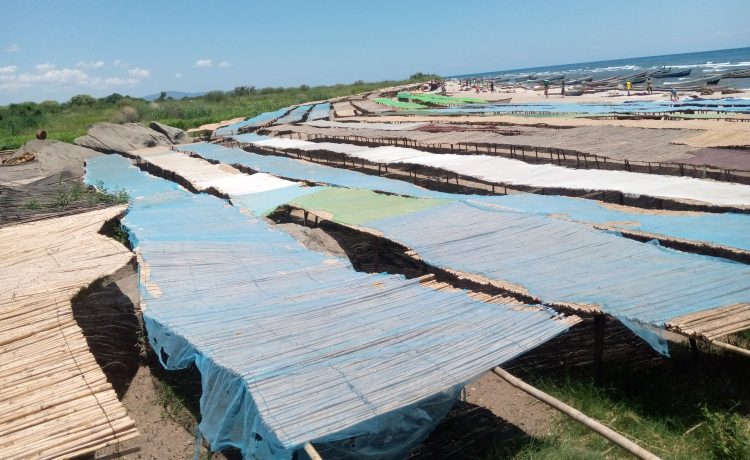 It is 10:30 in the morning of Wednesday. The heat of the scorching sun is being cooled off by the breeze coming from stones throw away blue waters of Lake Malawi.

The place is almost dead. Three lorries are parked with doors open, probably to allow free entry of fresh air to cool off boys looking after the cars whose drivers are taking a nap somewhere having traveled about 306 kilometers from Lilongwe all night long to fetch fish for the Capital City residents.

To us who have just visited the place for the first time, this looks a very busy place.

Having put all factors together, we realize that it is the lake and its fish that has brought this life at Tukombo Beach Village.

Established in 1978, the once upon unattractive place which had three decent iron sheet corrugated houses then, today, the village has all it takes for a trading centre, beautiful houses with electricity and a borehole to make life enjoyable.

According to Tukombo Beach Village Committee (BVC) chairperson Medson Phiri, it is the fisheries industry that has contributed to the area’s social economic growth and development.

Phiri narrates how people from various destinations and trades have eked a living over the years out of the lake.

Phiri goes on to tell the reason why Tukombo BVC is not as active as it would have been in the busy months of June and July when the lake is open for fishing.

This, he boasts is due to the intervention of the United States Agency for International Development (USAID) funded project being implemented by PACT dubbed Restoring Fisheries for Sustainable Livelihoods in Lake Malawi (REFRESH) which has civic educated community leaders and their subjects along the seven Lakeshore districts the importance of taking good care of the ecosystem to protect over 1000 species of fish in the lake.

He adds: “To that effect, the committee works tirelessly by intensively patrolling day and night to check use of illegal fishing gear and ‘thieves’ who come to fish when the lake is closed for fishing to allow the fish to breed”.

The committee’s vice chairperson responsible for patrols Patricia Chirwa proudly said that without fish, life would be harsh to many a people.

“The fisheries industry provides over 65 000 direct jobs and indirect jobs to about 500 000 people. It also provides four percent of the country’s gross domestic product (GDP). And 40 percent of total animal protein intake to human being comes from fish.

“Therefore, collectively, we have to jealously guard and protect fish to avoid loss of jobs and protein and income through taking care of natural resources and avoiding dumping polythene plastic papers and diapers,” she says.

However, Chirwa says despite various interventions that include taking care of the natural trees and conservation of soil to avoid soil erosion that causes siltation in the lake, intensification of night patrols, preservation of breeding cages, the challenge remains weak policies from government whose fines are too low to deter offenders and lack of speed boats for night patrols.

“We have our own by-laws that we use to fine those found using illegal fishing gear and during prohibited period but the K15, 000 fine is too low. We want government to formulate deliberate deterrent laws by revising the 1997 Fisheries Act.  And again, we wish we could have speed boats or even a drone for patrols,” she added.

When put to him what government is doing to end the challenges the fisheries sector is encountering despite revising the 2001 National Fisheries and Aquaculture Policy (NFAP) which aims at addressing critical issues affecting fisheries and aquaculture development in Malawi such as overfishing, director of fisheries Friday Njaya said the department has the Fisheries Conservation and Management Act of 1997 which is now under review to look into the issues of penalties.

“Participatory Fisheries Management is going on well depending on area and support from Councils and traditional leaders. For example, Mbenji Island in T/A Msosa Salima district is a shining example with Lake Chiuta as another outstanding example since the 1990s when the fishing communities banned nkacha net,” he narrated.

However, Njaya says understaffing remains one of the challenges to enable the department to effectively and jointly patrol the lakes with BVCs to check fishing during closed seasons and use of illegal fishing gear.

He acknowledges: “We are understaffed to reinforce fishing regulations. Second, we do not have patrol boats to cater for all fishing districts along lakes Malombe, Chiuta and Chilwa. At least we have just procured a boat for the Shire Valley and Mangochi district but still not enough”.

However, Nkhata Bay district REFRESH field technician Limbikani Chilima thinks efforts of preserving the environment to increase Malawi’s fish total catch which according to Annual Economic Report of 2018 has been fluctuating from 157,268 metric tons (MT) in 2016 to 199,454 MT in 2017, an equivalent of 26.8 percent rise and registered a slight drop of 185,345 MT in 2018 require collective hands.

“As a project, we are empowering fishers and the community along the lake and those in upland to avoid disposing off polythene papers and diapers that have negative effects on our ecosystem. And again, we advise them to avoid the wanton cutting down of trees to conserve soil to check siltation,” he said.

While REFRESH deputy Chief of Party and renowned Aquaculture and Aquatic Ecosystem Ecologist Dr. Daniel Jamu said from an ecological point of view, BVC members and fishers are told to use legal gear, protect fish breeding areas by declaring sanctuaries in areas where fish breed

“Communities should be empowered to manage their fish resources by building their capacity in fisheries management. Fishers and fish processors also have to be trained in post harvest management to ensure that the fish they catch is not lost through spoilage,” he shared his experience.

Parliamentary Committee on Natural Resources and Climate Change chairperson Welani Chilenga said efforts to conserve the banks of the lake from upland remains a key priority area in ecosystem based management fisheries that his committee is lobbying for good policies on forest conservation to reduce siltation along river banks.

“We want to lobby for stiffer penalties by supporting Forestry’s Act which is at an advanced stage. And again, we want to revise the Fisheries Act and marry it with Wildlife and Environmental Management Act which so far are the only Acts with strong custodial sentences with no option for fines so that we protect water in rivers and lakes for fish to hatch,” he said.

The slow industry’s growth comes despite the fact that the Policy takes into account key agreements and protocols including the Southern African Development Community (SADC) Protocol on Fisheries and the Abuja Declaration in which African governments unanimously agreed on sustainable fisheries and aquaculture by increasing fish production by over 250 percent by 2015 if Africa’s per capita consumption of fish is to be kept at its present level.

And again, it is against the Convention on Biodiversity and its subsidiary protocols, which commits Malawi to the preservation of Biodiversity and the Food and Agriculture Organisation (FAO)  Code of Conduct for Responsible Fisheries.

However, at the end of the day, there is great need of making sure that if we are to keep the indirect 500 000 jobs intact and sustain the 65 000 direct jobs and increase the four percent GDP contribution to the national economy and improve the current 40 percent of animal protein intake to humans, then there is need for all of us to be innovative in preserving and conserving the natural resources in order to protect and safeguard the ecosystem based fisheries management to sustain the value chain in the fish.