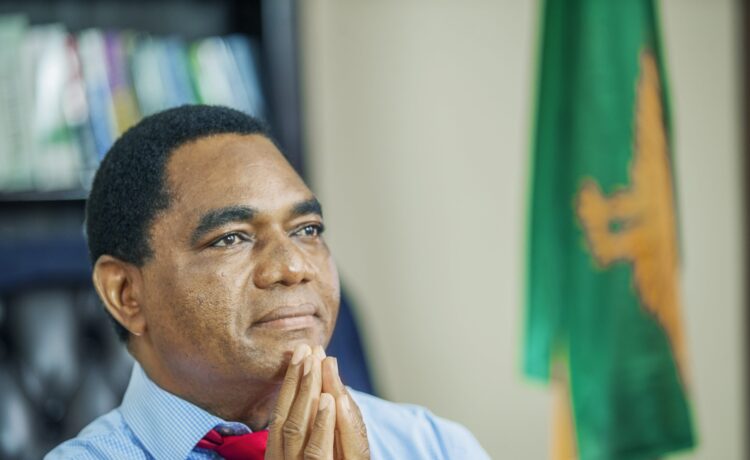 Speaking when he addressed PF youths, Lusambo told the gathering not to worry because their PF party was ‘still controlling entire government machinery’.

“We are still in power. All the Permanent Secretaries, entire Cabinet office and heads of government institutions are still reporting to President Edgar Lungu and very loyal. We have not given up power. Just go to any government office you will be assisted by our people”, he bragged.

Over the weekend, Lusambo was celebrating a victory party with one of the key persons appointed by president Hichilema.

Reacting to the statement, some members of the ruling UPND have urged President Hichilema to swiftly dismantle PF’s system and flush it out of the government or else risk regretting.

Bothered by PF’s claim, which is said to reflect some reality on the ground, UPND’s Western Provincial Vice Youth Treasurer UPND, Mupishi Jones, opened the taps of his heart to let his sentiments flow.

His remarks are as reproduced below:

“PF was in power for 10 years. It is out of power for less than a month. When PF came into power, it quickly flushed out all MMD appointed staff in almost all the key and sensitive positions and replaced them with their own trusted people. PF didn’t come from without. They came from trenches.

“HH and the UPND must realize that the entire government machinery is made up of PF cadres and their sympathizers.

“In addition, the PF captured the entire institutions of governance and tucked them into their armpits. These people are still bitter about the loss. It is naïve to think that they don’t congregate somewhere to plot their next come back move. Their strength lies in getting information from government circles through their people still in government to use to their advantage.

“One of their strategies is to have as many people as possible to start undermining and criticizing almost anything coming from government. HH and UPND in general must wake up and realize that the Zambian people entrusted them with the mandate of delivering on their promises with adequate constitutional authority. This mandate was given to the UPND in totality to decide on which direction to go including the authority to recruit the people of their choice. No one is going to question them on their appointments. What Zambians want to see is improvement in social services and their livelihoods period.

“Therefore, HH and the UPND must quickly reorganize themselves and fill up all key positions with their people as long as they are qualified. HH and the UPND must know that there are a lot of youths that have been with the party for decades without any means of survival waiting for the party to form government. These are the people that were looking forward to take over control of resources from markets and bus stations. These people need help to survive now that bus stations and markets are no go areas for cadres. These people are currently agonizing in socio-economic pain.

“Failure to prune PF people from government structures will have two consequences to the UPND government. The first one is a possible revote from the UPND youths because of hunger and social shame from being mocked. The second force will come from the PF cadres still in strategic positions in government masquerading as civil servants whilst plotting a PF come back move.

UPND must remember that the PF is reorganizing and rebranding itself. It will capitalize on UPND’s failures. As it stands, the PF still controls most of the government’s establishment structures. Please UPND move in before the PF move in to consume you!”

In Malawi, the situation is almost congruent as the initiative of ‘clearing the rubble’ seems to enjoy a snail’s pace, giving chance to civil servants that were planted by the former ruling party to sabotage the new administration in various critical fronts.