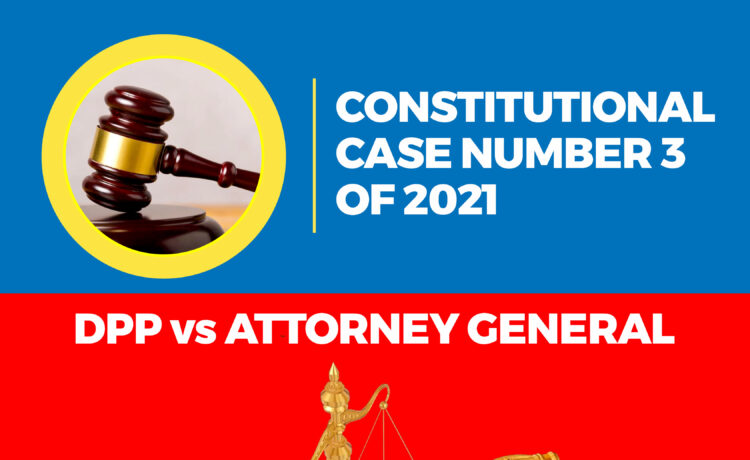 In this undertaking, I shall, for the want of making these narratives as short as possible, deal with two preliminary issues as raised by the Defendant and counter argued by the Claimant.

WHETHER DPP HAS LOCUS STANDI

It is a settled case now that a person who has no sufficient interest in matter has no right to ask court of law to give him a declaratory judgment. There is sufficient Common Law (which constitutes Courts’ decision) on this point both home and other jurisdictions. Here at home, a 2009 Constitutional Case of Registered Trustees of the Women & Law (Malawi) Research & Education Trust v The Attorney General made this point very clear. Before that, in 1995, the Court settled the same point in a case of President of Malawi and another v Kachere and others. Indeed, more recently, in February 2019 to be precise, the Court reiterated the point in the case of Chaponda and another, ex parte Kajoloweka and others, where Kajoloweka who commenced the action was found to lack locus standi and the Court dismissed his case on that basis. It was submitted by the Defendant (the Attorney General) that DPP has no sufficient interest to warrant the proceedings.

In reply, the DPP said it has sufficient interest to sue because it is a political party which has a large number of Members of Parliament (MPs) and supporters outside Parliament. He argued that it is the same sufficient interest which permitted MCP to commence proceedings that resulted into the finding of the illegality in the appointment of the Electoral Commissioners who were subsequently fired.

I find the DPP’s argument lacking, therefore disagreeing with it in the following manner:

To the extent that the DPP is seeking nullification of the Presidential and Parliamentary Elections that occurred in and after 2020 respectively, it is bringing an election case. In that understanding, the only identifiable litigant with sufficient interest is, according to limits demarcated by the PPE Act, a candidate of the said election bringing a dispute arising from that election. DPP was not a candidate. It only sponsored a candidate in the name of Professor Arthur Peter Mutharika. It is him who is, therefore, recognized as bearing locus standi. DPP cannot sue on his behalf.

But the DPP has argued that this is not an election petition case. Looking at the nature of the proceeding, indeed, the DPP petition does not satisfy the nature of an election petition. The DPP brought their action through other means which are not recognized to warrant declaration of an election a nullity. They have, through special summons, brought an issue that seeks the interpretation of a constitutional provision. To that extent, the questions would be: What is the dispute for the Court to resolve? Is the DPP having sufficient interest in that dispute? Can the Courts be approached by a random party seeking some Constitutional interpretations?

The answers to these questions are not favourable to DPP, its cause and goal. The DPP is inviting the Court to make a Constitutional interpretation. Unfortunately, or any person or entity cannot simply wake up any day and approach the Court to interpret for it, him or her some Constitutional provision. The Courts won’t entertain that. There must be a dispute to be resolved and the party bringing that dispute before the Court must have locus standi. This is because the Courts only exist to adjudicate legal disputes and it is in such doing that they interpret the law as per provisions of either the Constitution or any applicable written legislation. What is the dispute in section 75(1) of the Constitution? Does the DPP have locus standi to the same if it exists? The answer is in the negative.

Another question may, therefore, result: Why then did the High Court sit as a Constitutional Court Panel to interpret some Constitutional issues in the 2020 Presidential election that resulted into nullification of an election? Wasn’t the Court approached by individuals (Chilima and Chakwera) to interpret the Constitution? What’s the difference now? Good question. The difference is clear. In 2020 Presidential Election case, there a dispute of undue elections returns and the parties who brought the action were candidates, thereby having sufficient interest as recognized in the PPE Act. It was in the process of adjudicating that dispute that some constitutional issues incidental to the action came about and were resolved accordingly. The same is not the case with the present DPP action.

WHETHER THE COURT SHOULD ALLOW DPP TO BENEFIT FROM ITS WRONGDOING

In response, the DPP denies committing any illegality and says it is in fact the current administration which is guilty. The DPP says the MCP is guilty because it commenced the judicial review to challenge the appointment of the four commissioners from one party, the DPP.

On one hand, I find the DPP argument very strange. On another hand, I am in agreement with the Defendant in asserting that the DPP committed an illegality and the demonstration is as below:

Section 4 (2) of the Electoral Commissions (Amendment) Act provides that ‘leaders of political parties represented in the National Assembly which secured more than one tenth of the national vote in election to that Parliament, shall submit to the President A MAXIMUM OF THREE PERSONS as the Political Parties nominees as members of the Commission…’ (EMPHASIS is mine).

The law, as cited above, is undoubtedly clear that the DPP as an eligible nominator of candidates into the Commission was permitted, by law, to submit to the President A MAXIMUM OF THREE PERSONS. In blatant disregard of this clear provision of the law, the DPP submitted five persons to the then President to be appointed as Electoral Commissioners. By virtue of going against the provision of the law, the DPP acted unlawfully. By virtue of the DPP’s nomination being contrary to the law, the nomination was illegal. DPP cannot, therefore, not deny this fact with approval from the Court or any objective listener.

The then appointing authority State President), who coincidentally was also a leader of the DPP, appointed four persons from the submitted list of five, instead of three. This, again, was unlawful and in total disregard of the law because the then President was supposed to appoint three from the list of nominees submitted by the eligible political party. One would not be stretching imaginations to suggest that there was conspiracy to commit illegality here.

Now, coming to the law, it is a well settled principle of law that no-one can benefit from his own unlawful transaction. This position is non negotiable and the DPP’s attempt to invite the Court to overlook this principle is, in my view, a fruitless endeavour that comes across as a waste of the Court’s time.

That is my take.

®The contents and views contained in this published piece are not necessarily those of Shire Times. The author is contributing on agreed terms that limit the ownership of the content to himself.