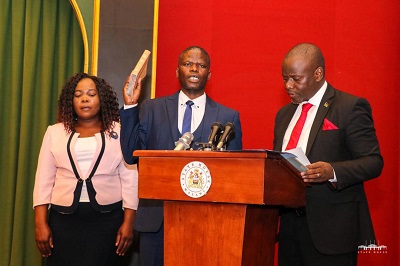 One of the new Judges in town: High Court Judge Howard Pemba
0Share

Section 112 (1) of the constitution gives Chakwera powers to appoint judges. However, the swearing in ceremony has come against the backdrop of a court case in which the Association of Magistrates in Malawi (Ama) is challenging the appointment of the said Judges.

Lawyer representing the association, Gilbert Khonyongwa, filed the preliminary skeleton arguments in court for the case.

In addition to the judicial review, Ama requests that the court postpone the decision to appoint people who have not worked in the legal system for very long, according to the court filings on this case.

“Ama desires to challenge, by way of judicial review, the decision to appoint the following individuals to the office of Judge of the High Court, His Honour Howard Brighton Pemba, Allan Hans Muhome, Etness Chanza, Eddah Edayi Ngwira,” reads part of the documents filed in court.

Ama stated that they are disappointed by these appointments arguing that it is unjust and unfair to appoint more people from outside the judiciary when there are already enough qualified and suitable candidates working in the Judiciary.

The group claimed that only Pemba, out of the appointees, was an officer with the Malawi Judiciary and the others were not.

“Within the Judiciary, there are qualified and suitable judicial officers, who have served longer than those who have been appointed. Ama believes that the President and the Judicial Service Commission, as decision makers, should have considered the interests of judicial officers who are suitable and qualified. Further, it is the legitimate expectation of Magistrates that they would be appointed as Judges before those who began to serve later than them,” reads the documents.

It stated that steps had been taken to attempt and settle this crucial dispute amicably and outside of court.

For instance, on January 27, 2022, the Chief Justice was met by judicial officers who were represented by the Magistrates and Judges Association of Malawi. They made it clear to him that many magistrates have been in unpromotable positions for a long time and proposed that whenever judges are appointed, at least 75% of the candidates be qualified and suitable judicial officers.

Ama claims that despite the Chief Justice’s assurances that he will look into the situation, nothing significant has been accomplished. Ama said on 22 November, 2022 it requested an urgent meeting with the Chief Justice to address the specific issue of the recent appointment of judges but the Chief Justice could not accommodate them.

“…because the attempts of Ama to resolve this important issue amicably out of court have been futile, Ama has had no choice but to bring forth this application to seek the intervention from the Court,” reads part of Ama’s documents.

Ama, a labour union registered under the Labour Relations Act, then goes on to request the court to stay implementation of the appointments.

It has also been suggested that there are qualified and suitable judicial officers who have held positions for a longer period of time than those who have been appointed, including Innocent Nebi, Kingsley Mlungu, Kondwani Banda, Austin Msowoya, Viva Nyimba, and Austin Banda.

“It is their legitimate expectation that they would be appointed as judges before those who began to serve later than them. As rational and reasonable decision makers, the President and the Judicial Service Commission should have considered the legitimate expectation of the named judicial officers. By failing to do so, the appointing authority has acted irrationally and unreasonably,” the document reads.

When contacted if he is ready to defend the matter, Attorney General Thabo Chakaka Nyirenda said he is yet to see the documents.

“I will attend to it as mandated by law,” Nyirenda said.

However, on Thursday, the four Judges were sworn in and therefore will commence their duties thereby making the Ama court action otiose.