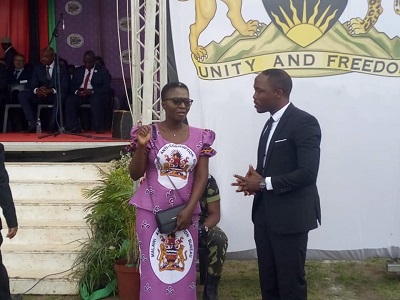 After the pre-dawn dramatic arrest of the Anti-Corruption Bureau Chief, Martha Chizuma, and the strong backing and support she received from both opposition parliamentarians, civil society, and western diplomats forcing the government to make decisions to please such stakeholders, the Director General has made the first public appearance in a clear show that she is truly back on her position as ACB Chief.

Chizuma is attending this year’s international Anti-Corruption Day at Kasungu Stadium, an event which will be presided over by President Lazarus Chakwera. The event is yet to start but pictures coming of the venue flooding social media shows government officials posing for a picture with Chizuma, otherwise also known as the Pangolin, the heavily protected species.

Chizuma was arrested on a complaint lodged to the police by the Director of Public Prosecutions Steve Kayuni who said felt injured because of the leaked audio made by Chizuma in January wherein she was complaining the lack of synergy and commitment by other stakeholders in the fight against corruption. The charges, upon pressure, have since been dropped.