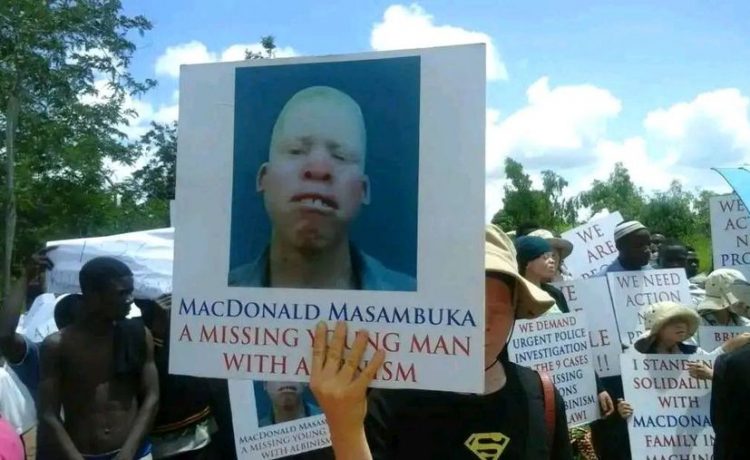 The Blantyre High Court has convicted all 12 suspects who were connected to the murder of a man with albinism, McDonald Masambuka.

Judge Dorothy Nyakaunda Kamanga delivered the lengthy judgment today, in which the twelve people, including a Catholic Priest, Father Thomas Muhosha, a police officer, Chikondi Chileka, the deceased’s biological brother, Kassim Masambuka and Machinga District Hospital Clinical Officer, Lumbani Kamanga, were arrested in 2018 in connection with the murder of Masambuka and have been answering various charges in the case.

The 12 accused persons were answering seven charges under the Penal Code and Trafficking in Persons Act and the court will soon announce the date for sentencing.

During the deliverance of the judgment, Judge Kamanga narrated what had transpired in the case that led to the brutal murder of Masambuka citing testimonies by witnesses and confession by the suspects.

She narrated how the people who killed Masambuka pretended to be matchmakers.

She said they told the deceased that they had found a wife from the northern region and told him to make plans to meet the said girl in Nselema.

The deceased went to Nselema to meet the said girl near a telecommunications tower and while he was waiting for the girl, three of the accused went behind him, grabbed him by the neck and killed him.

Meanwhile Chief Executive Officer for the Human Rights Commission, Habiba Osman has celebrated the conviction of the 12 calling it justice at last for the late Macdonald Masambuka.

She posted on social media minutes after judgment was delivered: “Thanks to the lawyers who worked so hard to bring the perpetrators to book all these years and thanks to APAM for your persistence in pushing for justice. Thanks to the Court for finally delivering the verdict.”

The first guilty judgment in the case was of murder contrary to section 209 of the Penal Code which was leveled against Maxwell Matchina Sosola, Dickson Manesi Ndengu, Bashir Lilongwe, Alfred Yohane and Cassim White Masambuka.

The second guilty judgment was of causing another person to harm a person with disability leveled against Master Mphulanya Injesi, Lumbani Kamanga, Cassim White Masambuka and Luckness Magombo as they killed a person with albinism.

The third guilty verdict was of causing another person to harm a person with disability against Master Mphulanya Injesi and Lumbani Kamanga as they extracted human tissue from a person with albinism.

The trial commenced on 23rd August 2018 with 22 accused persons but ten people had their charges dropped by the State.