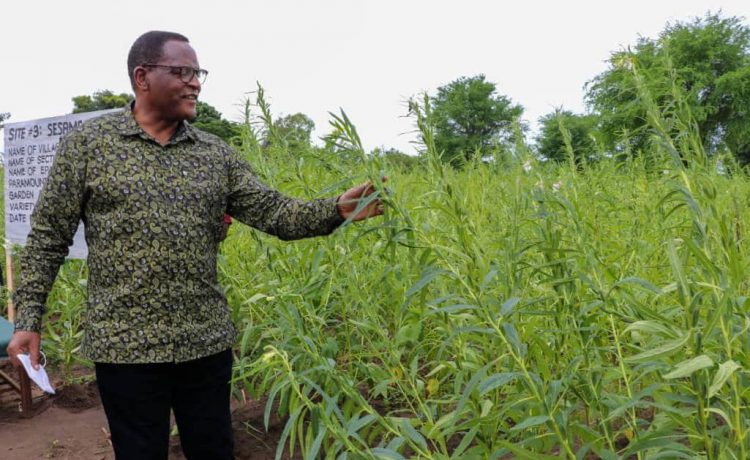 This visit was the first time the president was not taken to inspect maize fields but rather a variety of other crops including sesame and cotton which are widely grown in the district.

In his remarks, the president said this is indicative of the potential other crops have to form a major component of the country’s farming efforts.

He added that it was the first time during crop inspection that he had interacted with a sesame farmer who enlightened him on how this rare crop can add value to the country’s economy while transforming livelihoods at household level.

“I am convinced that we must encourage sesame farming on a large scale because it is a readily available raw material in the production of cooking oil, an important commodity for every Malawian home. I learned the crop is also used for a lot of health remedies, confectionery manufacturing, culinary supplements and soap manufacturing,” said Chakwera.

Sesame is an important cooking oil yielding crop with oil content of 40-50% and popularly known as Til or Gingelly, and the sesame seeds powder is used as a flavoring agent.

During the inspection tour, the president also visited rice farmers at Hara Rice Scheme which has been recently revamped where he said there is a need to harness all rice farming opportunities for Karonga, it being the largest producing district of the commodity in the country.

He said: “What is emerging prominently among all these farmers is that they are facing one major impediment to their venture, reliable markets.  Hardworking farmers must not suffer with unfair pricing or lack of markets. I have, therefore, advised the Minister of Agriculture to ensure they guard the farm-gate prices to help farmers earn decent income from their undertaking.”

After the crop inspection, the Malawi leader held a development rally at Chinsogholo Primary School, where people from the district led by Paramount Chief Kyungu had gathered to hear a speech from the president.

During his speech, Kyungu, after welcoming the president, raised some pertinent issues affecting people in the district that need immediate government attention.

For instance, he cited the ever-growing cases of illegal immigrants passing through the district saying the Malawi Police Service and Immigration Services need to be empowered so that they manage to deal with the vice.

Kyungu said: “it is worrying that some Malawians continue harboring political asylum seekers and illegal immigrants who are entering the country aided and abetted by some influential individuals.”

On this, President Lazarus Chakwera warned people who use government resources or their influence to aid illegal immigrants into the country that they will face the long arm of the law.

“Whether you are a police officer, an Immigration officer or a politician, but you are abetting or aiding illegal immigrants, you will be dealt with. Some are using our vehicles; government vehicles to transport these illegal immigrants. I am telling you now and Paramount Chief Kyungu is my witness. That tendency should end now because we will deal with you,” Chakwera said.