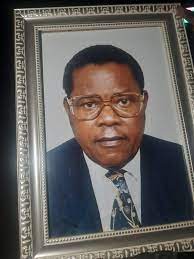 One of Malawi’s freedom fighters and longest serving public servants Elia Katola Phiri has been laid to rest today at Nkhokaminyala Village in Traditional Authority Chilowamatambe in Kasungu.

Katola Phiri died on Tuesday after a long battle with gout, and was accorded state burial with military honors after a directive by President Lazarus Chkwera.

Katola Phiri held several important positions in government since the early years of Malawi’s independence in 1964.

During the struggle for independence he was once jailed at Marronderas in 1959 while Dr. H. Kamuzu Banda, Malawi’s first President was jailed at Gwero Prison both in Southern Rhodesia (Zimbabwe).

After independence Late Katola Phiri served as a Member of Parliament for Kasungu Central Constituency from 1964 to 1994 and he was one of the longest serving ministers during Kamuzu Banda’s era.

When Joyce Banda became president in 2012, Katola came to prominence again as he was appointed aide to the new President.

Until his death, he was a senior member of the Peoples Party (PP).

He is survived by a wife, 10 children and 24 grandchildren.