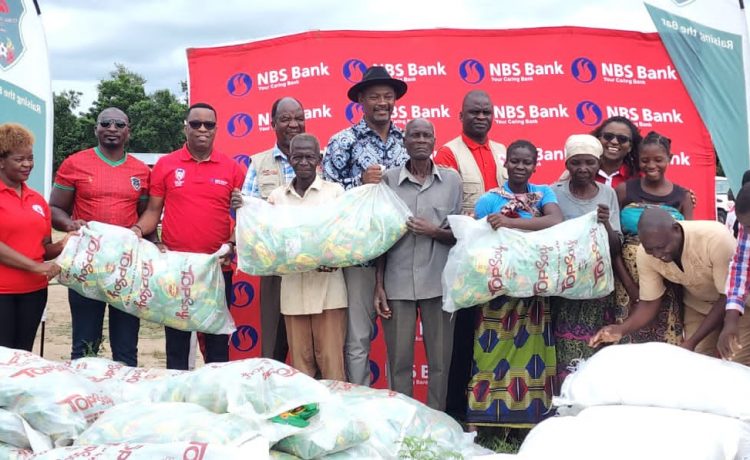 Football Association of Malawi in partnership with NBS Bank and Malawi Red Cross Society has donated food items to 986 households in Chikwawa district who were affected by floods as a result of Tropical Cyclone Ana.

The donation was done from proceeds from the NBS Bank Charity Shield which was held in March to launch the 2022 soccer season.

Speaking after the donation, Deputy Chief Executive Officer for NBS Bank Temwani Simwaka said the bank was aware of the disasters that plagued the country in the first quarter of this year and saw it necessary to play their part in providing relief to affected communities.

“With our wide footprint, we have customers from all corners of the country who have trusted and supported us in the good and bad times; our customers have helped us get to where we are today.

“Disasters such as these affect the Bank through our valued customers, and we are here today for them as they have done for us in the past,” said Simwaka.

One of the beneficiaries of the relief items is Divason Dyson from Santana 2 village who said the donation was timely with affected households meeting many challenges in their day to day life.

“We are very grateful for the donations, households here are struggling to have basic needs like food and proper shelter,” he said.

Meanwhile Football Association of Malawi President Walter Nyamilandu said the initiative was done as football is one of the tools to fix social economic problems.

“Football is beyond entertainment, it is a tool that can be used to promote economic development and we can also be a vehicle to publicize the problems people are facing here,” said Nyamilandu.