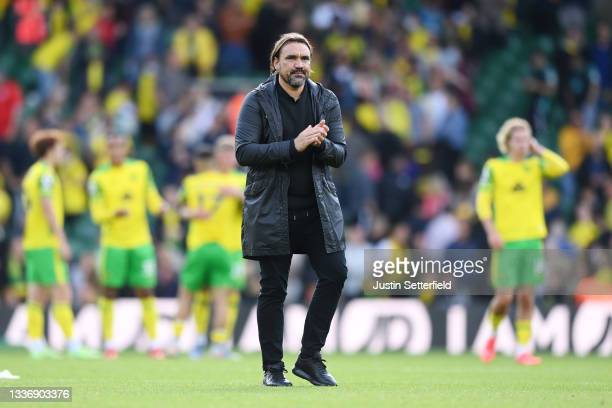 Norwich City head coach Daniel Farke has been sacked hours after their first win of the Premier League season.

The Canaries won 2-1 at Brentford, but remain bottom of the Premier League with five points from 11 games.

Farke had led Norwich to promotion from the Championship twice since 2017.

“We feel now is the right time for a change to give ourselves the best opportunity of retaining our Premier League status,” said sporting director Stuart Webber.

In Farke’s post-match interview with BBC Sport, he gave no indication he knew he was about to lose his job.

“We definitely have a chance [of survival],” he said. “It’s a long marathon. The longer we work together, the better we will be as a team. I can’t guarantee we’ll stay in the league but don’t write us off.”

The German was Norwich manager for 208 games in total, winning 87 of them.

He took over in 2017, leading the Canaries to the Championship title in his second season.

They were relegated after one campaign in the Premier League, but bounced straight back as champions last season.

But he has the fourth worst record of all Premier League managers to have taken charge of 20 games or more – winning just six of his 49 top-flight games.

Ex-Liverpool and Fulham midfielder Danny Murphy told Match of the Day: “He has made some special memories at Norwich.

“The problem is the coach’s job is to set up the tactics and style and it is too much the same as last time they went down. I think the change was the right thing, they have given themselves a fighting chance.”

Former Norwich striker Chris Sutton told BBC Radio 5 Live: “I think if Norwich have to make a change, they have to make it now to give themselves a chance.

“I think Farke’s done a fantastic job, Norwich backed his model, they gave him a four-year deal in the summer.

“This must have been in the thought process for a while. We don’t like to see people sacked, but Norwich City want the best chance to be in the Premier League.

“You look at teams like Brentford, they’re competitive. Norwich haven’t been.”

The Canaries confirmed that coaches Eddie Riemer, Chris Domogalla and Christopher John have all left the club too.

Webber said the decision “was not an easy one”.

“All at Norwich City should be forever grateful to Daniel and his staff for the significant role they have played in our journey,” he added.

“They helped deliver two Championship titles, many memorable moments and they all fully bought into our philosophy and what it means to be part of this football club.

“Daniel and his staff will always be welcome back here. I’d like to take this opportunity to thank them all for their hard work and wish them well for the future.”

A Norwich statement read: “The club will issue a further update on its first team staff in due course.”

Their next game is not until they host Southampton in two weeks’ time because of the imminent international break.