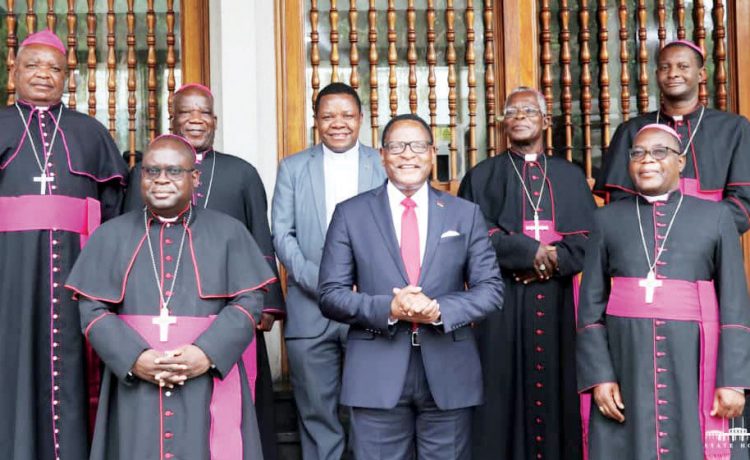 President Lazarus Chakwera has dispelled rumours that he is not in good terms with Vice President Saulos Chilima, saying the hearsays are innuendos being perpetrated by propagandists.

For some time now, social media has been awash with talk that the President and his vice have not been on cordial terms, and this was heightened when the former stripped the latter of his Minister of Economic Planning cabinet portfolio and bestowed on Sosten Gwengwe who doubles as Finance and Economic Affairs minister.

But Chakwera, who is in the southern region for official duties, told Catholic Bishops under the Episcopal Conference of Malawi (ECM) held at Sanjika Palace on Monday that the relationship with his deputy was fine.

His spokesman, Anthony Kasunda, confirmed President Chakwera meeting the bishops for the sixth time since he ascended to the presidency in June 2020.

“President Chakwera pointed out that he agreed with the Vice President to use the Public Sector Reforms Report internally and that what should be made public be recommendations collectively adopted by Cabinet to ensure mutual responsibility as guided by the Tonse spirit.

“On why he merged the Ministry of Finance with the Ministry of Economic Planning and Development and, by implication, taking away the latter from Chilima, President Chakwera informed ECM that the merger was done in compliance with a recommendation made by a special committee which was led by the Vice President himself,” Kasunda is quoted as saying in the press.

During the meeting, Chakwera is said to have reassured the bishops of his determination to fight corruption to the letter.