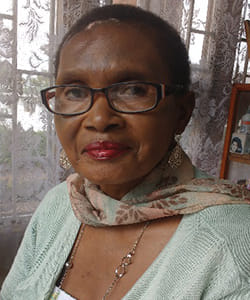 According to her son, Nathan Mkamanga, Emily passed on this morning at Wezi Medical Centre in Mzuzu.

“She has been in poor health for some time,” he said while confirming the death to Nation Online.

Mkamanga, who was a columnist for Nation on Sunday, became so popular during the doldrums of the regime of late Bingu wa Mutharika with his scathing articles which the late president used to respond in public rallies.

Born in Chilumba on 27 December 1949, Nkamanga was educated at Livingstonia, Uliwa, Lilongwe Girls’ Secondary School and the University of Malawi, where she studied in the Bunda College of Agriculture and graduated in 1971.

After working at Chitedze Agricultural Research Station she was for fifteen years an Agricultural Information Officer at the National Bank. While still there, in 1990 she published The Night Stop, a novel about “the long-suffering wife of a promiscuous lawyer”.

Her retirement from the bank in 1993 coincided with the end of Dr Hastings Banda‘s 30 years in power. In 2000 her account of those years was published by John Lwanda‘s publishing firm Dudu Nsomba. Called Suffering in Silence: Malawi women’s thirty year dance with Dr Banda, the book  has been described as “an analysis of the obsessive psyche of a modern tyrant”[ and a “polemic” that becomes “a form of prosecution of Banda”.

The “dance” of the title refers to the women’s dancing arranged at political rallies praising Dr Banda.While the dancing had once been associated with female activists it came to be required of all women and controlled through the Malawi Congress Party leadership.

Mkamanga said women were coerced and exploited to satisfy the ruling dictator, even though he presented himself as a guardian to women: as a nkhoswe, meaning an authoritative uncle or brother in Malawian matrilineal cultures.

She was a regular columnist for Nation on Sunday and Nyasatimes, and also wrote political and social opinion pieces elsewhere.

She has been called a “social historian” as well as commentator or journalist.

In 2013 the president of the Malawi Writers Union described her as one of the only three “known” women writers in the country.

The others were Walije Gondwe and Janet Karim.

She served on the boards of various institutions including ActionAid in Malawi, the Media Council of Malawi, the Journalists Union of Malawi, Youth and Society, and the Institute for Investigative Journalism.