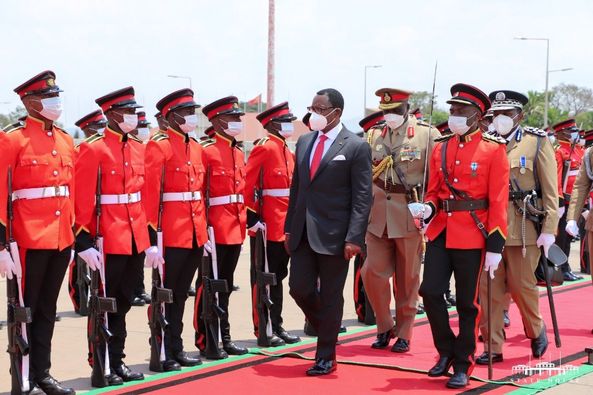 BLANTYRE-Malawi President Lazarus Chakwera has this morning left the country for state visits to Kenya, United Arab Emirates and Scotland.

Speaking to reporters on his departure, the Malawi president said his trip to Kenya is an opportunity for Malawi to learn a number of things that can transform Malawi.

Chakwera will be in Kenya from today to October 21 where he is expected to hold bilateral talks with his Kenyan counterpart, Uhuru Kenyatta.

“The State visit will be preceded by the 3rd Session of Malawi- Kenya Joint Permanent Commission of Cooperation (JPCC) meeting which will be held from 16th to 19th October, 2021. The 2nd Session of Malawi-Kenya JPCC was last held in 2002, in Blantyre, Malawi. Since then, several attempts to revive the JPCC failed.

“However, following bilateral talks that were held between His Excellency Dr. Lazarus McCarthy Chakwera and His Excellency Uhuru Kenyatta, the two leaders agreed to urgently revive the Cooperation taking into cognizant of the various opportunities that lies between the two countries.  Kenya is one of Malawi’s strong allies in the East African Block that can assist the country to penetrate into the Region’s market,” reads the statement in part.

Kenyan President Uhuru Kenyatta publicist, Mararo disclosed that Chakwera will be the guest of honour at this year’s Mashujaa Day Celebrations, a day to celebrate the country’s heroes.

The celebrations will take place on Wednesday, October 20th 2021 at Wang’uru Stadium in Kirinyaga County.

On Thursday, 21st October 2021, Chakwera and his delegation will be officially received at State House, Nairobi by his hosts, President Uhuru Kenyatta and First Lady Margaret Kenyatta.

The President will then proceed to United Arab Emirates where he is expected to attend the fifth Global Sustainable Technology and Innovation Community from October 24 to 27 in Dubai.

“This year’s Conference which will take place in the context of World Expo, will hold a number of events, including a High Level Governmental Session, as well as, Plenary Session on Nationally Determined Contributions (NCDs) for achieving climate goals and Sustainable Development,” the statement reads.

According to State House, he will also meet top business gurus in Dubai.

From Dubai, the President will head for Scotland to attend the high level segment of the 26th Session of the Conference of Parties to the United Nations Framework Convention on Climate Change (UNFCCC).

According to State House, the President’s participation at the COP26 is also crucial as it demonstrates Malawi’s commitment to combat climate change in line with her obligations as a State Party and signatory to the UNFCCC, Kyoto Protocol and Paris Agreement.

The President’s official visit to the UK will also provide an opportunity for Malawi to lobby for increased support towards climate finance and discuss with other World Leaders issues of mutual interests.