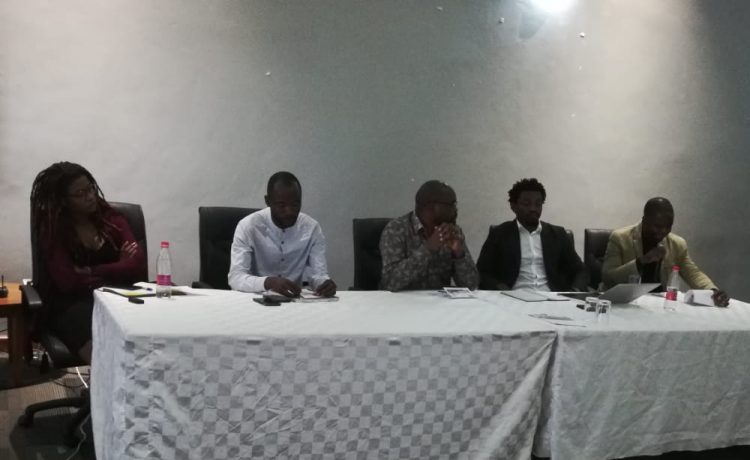 Kajoloweka (in black jacket) speaking during the press briefing
0Share

Activist Charles Kajoloweka who is Executive Director for Youth and Society (YAS) has called on the Judicial Service Commission to intervene and investigate what he called “Judicial Harassment” on how the case against Anti-Corruption Bureau (ACB) Director General Martha Chizuma was filed.

Kajoloweka made the call in Mzuzu this morning where a Consortium of Civil Society Organisations against corruption held a press conference on the recent summon of the ACB Director by police.

Kajoloweka described the recent events surrounding Chizuma as a distraction in the fight against graft.

He said: “What is happening to Martha Chizuma is against the law. The Judicial Service Commission must investigate issues that raise questions. This is one case that needs that investigation for Judicial accountability.”

Also present at the presser was Church and Society Executive Director, Moses Mkandawire, who said the ACB Director General, has the support of CSOs in the fight against corruption.

“We are monitoring and will find ways to deal with individuals and institutions that want to attack law enforcement institutions like ACB.

“What we are demanding from the ACB is to release all the names that they are investigating. We believe naming and shaming of the suspects can help in the fight against the vice,” said Mkandawire.

Meanwhile earlier in the day the Malawi Police Service had suspended its plans to interview Martha Chizuma on the leaked audio in which she is suspected to have broken her oath of secrecy under the Corrupt Practices Act.