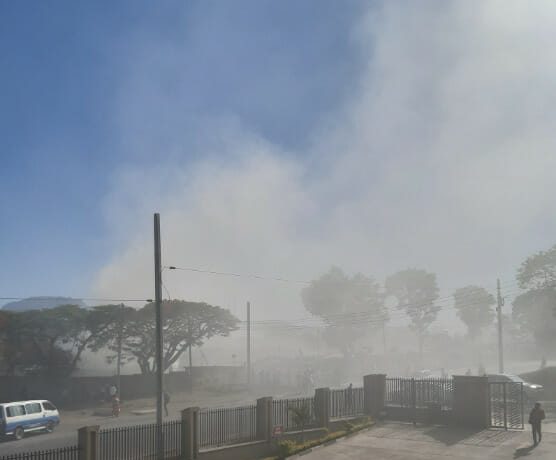 Government, through the Ministry of Industry, has promised to help two companies which were razed down by fire in Blantyre on Monday this week to come back to their normal operations so that employees do not suffer job loss.

Speaking when he visited the two companies, minister responsible, Roy Kachali Banda, said as soon as possible, government will come in to make sure operations at the companies are normalised so that employees do not lose out.

“For now we are very thankful to God that there are no fatalities and on top of that we must also keep in mind that we have one or two gentlemen in hospital recovering from injuries and we hope that they recover in the soonest possible time. The fire here brings about a lot of questions about the safety of this operation; in particular and operations that are around here, especially those that carry out business with combustible materials.

“The other is issue is that of jobs that we are concerned about. This company employs about 300 people, the one next here about 70 people that work here but also there are other operations that bring the people up to 800 people involved. So, as soon as possible, we would want to see people going back to work but, of course, without taking any shortcuts,” Kachali explained.

On his part, Leopold Matches 2018 Limited Company proprietor, Raffick Osman, says it is very sorry that the fire which started from his company extended to a nearby company, Eshani Products Limited which produces plastic bottles, among other products, and caused serious damages.

Osman added that part of his company’s equipment and other raw materials were saved during the arson.

He said: “The effect, I would say, has been very bad, but however, by the grace of almighty Allah, the machinery has been saved. The firemen have done a great job to put off the fire whereby the machinery is intact and they have done a good job, they have saved our warehouse materials; all the raw materials I should say, which are also intact.

The fire on Monday at the company is believed to have erupted from electrical fault, and this was a second incident as another fire gutted part of the company in 2018.