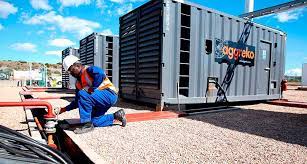 Minister of Energy Ibrahim Matola has added clarification to the reason why Electricity Supply of Corporation of Malawi (ESCOM) has terminated its contract with generator energy power firm Aggreko which was adding 78 megawatts to the national grid.

Addressing the media during government meets the press this morning in Lilongwe, Matola said the cost of running the diesel generators is very high and expensive for Escom to continue the contract.

He added that currently the government is already working on cheaper alternatives to the generators like solar generated power plants currently under construction by renewable energy private companies.

“We have seen concerns from different sections of society about the termination of the Aggrekko contract, others are suggesting the millions we spent on generators and fuel should be given to Egenco so that they fix their hydro-electric power plants.

“There are also fears that the decommissioning of Aggreko machines will result in massive load shedding but no this is not the case, we have plans as a government to find long term solutions,” Matola said.

In addition to the minister’s sentiments, Escom Director of Finance Clement Kanyama, said that the corporation is putting in place measures aimed at tracking power losses in the transmission system.

“A recent study we conducted in partnership with EGENCO revealed that as we have only been able to utilize less than half of the power Aggreko was adding to the grid despite the large sums of money that Escom was paying,” he said.

Aggreko plc is a supplier of temporary power generation equipment and of temperature control equipment.

It is headquartered in Glasgow, Scotland, United Kingdom.

Different commentators observe that if Mozambique electricity can be added to Malawi grid, this can solve electricity outage problems which have been hampering the country’s economic growth.