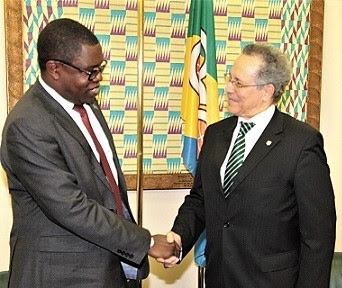 Malanji faces charges for allegedly possessing property suspected to be proceeds of crime, including a Bell Helicopter-430 valued at $1.4 million.

Malanji was arrested by the anti-money laundering unit of Zambia’s Drug Enforcement Commission (DEC) in collaboration with the Anti-Corruption Commission, DEC spokesman Mathias Kamanga told reporters in a statement.

Malanji and Yamba were jointly charged over the transfer of K154 million ($8.8 million) to a Zambian mission abroad without following the law on supplementary expenditures.

Kamanga said Yamba had been released on police bond while Malanji had been detained in police custody as the commission is waiting for him to meet conditions for bond.

Malanji served in the Cabinet of then-President Edgar Lungu, who lost power in August through an election won by the Hakainde Hichilema-led United Party for National Development (UPND).

His purchase of the helicopter was one of the matters that raised eyebrows at the height of government corruption allegations against Lungu’s administration.

Home Affairs and Internal Security Minister Jack Mwiimbu said on Friday that a government joint investigations team had been established with the intent to recover suspected looted state assets.

Brian Mundubile, leader of the opposition in parliament, blasted the investigations team as a witch hunt against perceived political opponents.