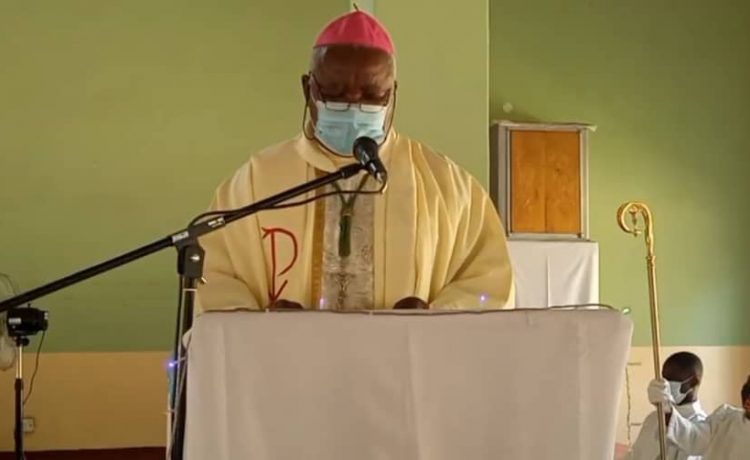 Bishop Martin Mtumbuka of Karonga Diocese of the Catholic Church has urged leaders of nine political parties in the Tonse Alliance government to come out from their cocoon and help President Lazarus Chakwera fix the country’s ailing economy for the betterment of the poor.

Bishop Mtumbuka made the call on Saturday during the New Year’s special Mass at St. Mary’s Catholic Church in Karonga district whose message dwelled much on social economic challenges the country is facing which he said has impacted negatively on people.

He said: “It is no secret that people in 2021 struggled to make ends meet due to economic challenges the country is going through.  Let us join hands to pray for the country and its leadership to fix the economy for the betterment of the poor.

“Above all, let leaders of the other political parties in the Tonse Alliance government who seem to have abandoned Chakwera to come out from their cocoon and help President Lazarus Chakwera with solutions to transform the country’s financial challenges”.

The Bishop further paid tribute to Chakwera for his humility and stand towards people’s concerns over harsh living standards, urging his fellow Tonse Alliance government partners to work hand in hand in 2022 to bail Malawians out of their miserable economic challenges.

He said: “Let me commend the ACB, Judiciary and the police for working tirelessly to uproot corruption which is evil and retards development. Let me also comment President Chakwera for his commitment to ending corruption through political will by allowing the ACB to work independently.

“Most importantly, let us receive Jesus Christ as our saviour if we are to win the battle against corruption because the ultimate solution in eveil in man is to repent”.

However, one of the key partners of Tonse Alliance government, Alliance for Democracy (AFORD) president Enock Chihana quashed down the accusations, saying much as they are into government, the key responsibility of advising the President on policies and economy, lies in the hands of cabinet ministers.

“There is one President at a time. Our role as partners is to advise at individual level but the President and his ministers conduct routine caucuses which we are not part of. We are part of political system and not government system, so, we can’t make any meaningful contribution,” he said.

In a separate interview, a Zomba based political science lecturer Ernest Thindwa concurred with both the Bishop and Chihana, saying most cabinet ministers have failed to deliver to the expectations of the public.

He said: “Bishop Mtumbuka is right but I wouldn’t fault the leadership of the nine political parties in the Tonse Alliance government. I feel most Ministers have slept on their jobs. There is no poor service delivery and so far, there is no significant change through service delivery which this horde of Minister’s has miserably failed”.

However, Minister of Information and government spokesperson Gospel Kazako said said that as government they have time without number registered their agreement with the  cries, pain and discomfort that the people are passing through due to the economic challenges.

“As government, much as this is a global economic malaise, we are doing all we can to ensure we mitigate the pain created by the negatively altered economy. This is why President Chakwera designed a Social Economic Recovery Plan which is meant to be a two year blue print that will escalate the process of realigning the economy by recalibrating several sectors inter alia agriculture, infrastructure development, mining, manufacturing, value addition, creation of youth employment and tourism  All this will be done to inject an active adrenaline in the economic.

“The plan will ensure we increase our exports in order for the economy to generate forex that is needed to achieve economic stabilization. And again the plan will relook and enhance the new economic metric gross domestic product (GDP-B) which is the improvement of trading using digital means which  will positively affect all sectors including education and commerce that in turn will bring the much needed efficiency in the much needed tax collection fluent mechanism,” he said.