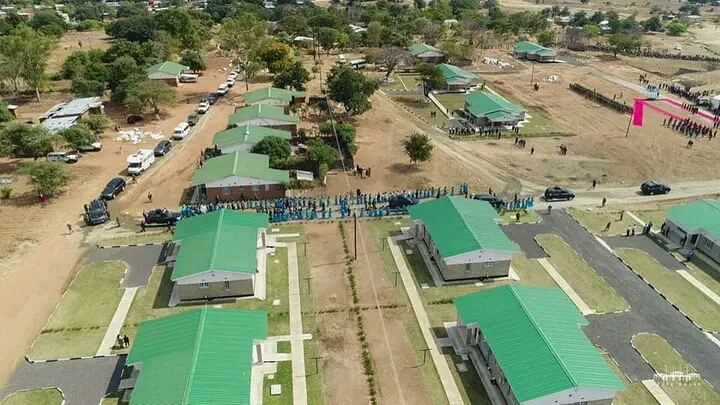 Aerial View of the constructed police houses in Mangochi
0Share

President Lazarus Chakwera today presided over the official handover of staff houses for police officers at Malamia Police Mobile Service Camp at Malindi in Mangochi delivering on his promise of constructing better housing units for the country’s security agents.

The houses are under the 10, 000 houses project to be constructed for security institutions in the country.

Speaking at the ceremony, President Chakwera reiterated his government’s commitment in laying a public service foundation which is based on performance and results.

He added that the quality of the housing units commissioned is an indication that his administration is on track to fulfill its promise to Malawians.

“This sort of quality is not only evident at Malamia but across the country where these units are being built.

“Ever since I launched the project to construct 10,000 houses for the Malawi Defence Force,  Malawi Police Service,  Malawi Prison Service and Department of Immigration and Citizenship Services, this is one of the best house construction performances I have seen from a contractor. Well done,” said Chakwera.

The Malawi leader also added that security agencies remain a key component in safeguarding the constitutional attributes of Malawi’s sovereignty hence the welfare of officers serving in these agencies must be proportionate with their nature of work.

Speaking on the progress of the project, Minister of Lands and Urban Development Sam Kawale disclosed that about 115 out of the 231 houses for the first phase have already been completed and overall about 4,000 houses are currently under construction.

Kawale also said all the 10,000 houses under this project will be completed by 2025 as promised by the current government.

Meanwhile on his part, Commissioner of Police Happy Mkandawire has commended government for the constructing houses for security personnel.

After presiding over the handover of the police houses, President Lazarus Chakwera then held a Development Rally at Malindi Ground where he addressed people of on his administration’s development agenda.