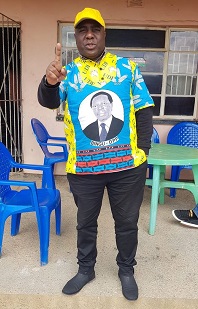 Social media influencer Julius Mithi, a Facebook addict who is also a senior Accounts Assistant in the Ministry of Water and Sanitation has been interdicted for practicing partisan politics on Facebook.

The government has since written Mithi to stop exercising his powers and duties as a government official during this time of interdiction and also that he should not go outside this country without the approval of the government.

“We received a formal report that you are in the habit of writing articles on various social media platforms casting government and other senior government officials. Such castigations are mostly unfounded, impolite, and discourteous.”

“I write to you that these allegations constitute a serious act of misconduct in terms of the Malawi Public Service Regulations (MPSR)…I am interdicting you from exercising the powers and functions of your office as Senior Accounts Assistant (Grade) on without pay with immediate effect,” wrote Accountant General Henry Mphasa to Mithi.

In reaction, Mithi has posted his picture in opposition United Democratic Front and Democratic Progressive Party regalia. During the DPP regime, Mithi was bizarrely promoted by President Mutharika in what many viewed as political appeasement. He later was demoted to his original position when power shifted in 2020.