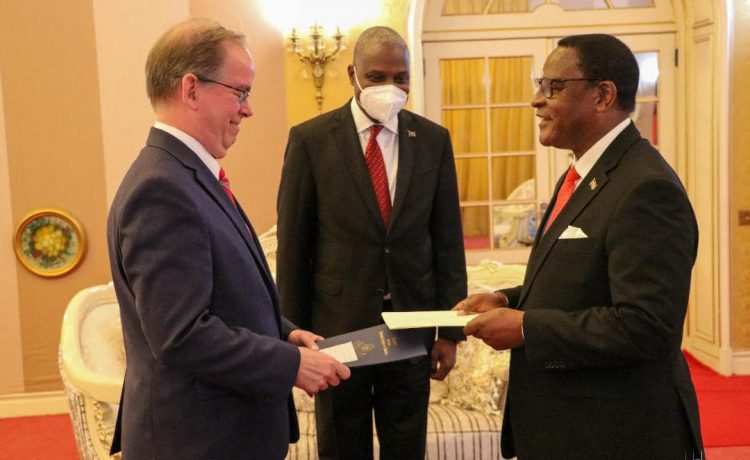 US Ambassador to Malawi, David Young, during his presentation of letters of credence to Malawi President, Lazarus Chakwera, as Chief Justice Rezine Mzikamanda looks on
0Share

Malawi Democracy is under threat following donor interference and meddling in domestic political and administrative affairs, a development that is falling against international relations protocols.

Of late Malawi Donors, in particular the United States of America Government through its embassy in Lilongwe, have been interfering on Malawi’s national issues which is against the internationally-agreed practices and guidelines on sovereignty.

Article 2(4) of the United Nations Charter prohibits the threat or use of force and calls on all Members to respect the sovereignty, territorial integrity and political independence of other States.

In its 2021 meeting, the UN Security Council underlined the principles of this particular provision of the UN Charter by, among thers: (a) reaffirming the prohibition of the threat or use of force in international relations; and (b) reiterating the importance of non-interference by States in the internal affairs of others;

This re-affirmation followed a 2019 complaint that Rwanda filed against intruders of its sovereign integrity and political culture. Noticing the threat to the UN Charter, on 20 November, 2019, Rwandan Deputy Speaker of Parliament, Jacob Oulanyah appealed to the European Union (EU) to respect the sovereignty of African states.

He accused the EU of continuously influencing how African countries define democracy, saying that whilst many African states are independent, they cannot practice their own ideologies of democracy.

The Joint Political Committee which met from 13 to 22 November 2019 debated and adopted a report on democracy and respect for the constitution in EU and ACP states.

Oulanyah expressed dissatisfaction with the report for criticizing 18 nations without presidential term limits in the Sub Sahara Africa arguing that some developed countries do not have written constitutions.

“What should be clear is the respect of the constitution and how, if at all, the people wish to amend it to suit their country’s evolving needs,” Oulanyah said.

What Rwanda petitioned against in the meeting is a clear concern here in Malawi where most donors continue peddling their agenda contravening sovereignty of the country.

One case study that has highlighted this concern in Malawi is contained in the report by the Twea Commission of Inquiry which was instituted to investigate matters relating to a December 6 arrest of the Anti-Corruption Bureau (ACB) Director General, Martha Chizuma.

According to the inquiry report which was released on 4th January 2023, the US Ambassador to Malawi, David Young, had, on the day the arrest occurred, interfaced with the Malawi Attorney General to whom he demanded an immediate release of the ACB Director General, concluding that demand with a threat that should the demand not be met, then the US Government would impose some economic sanctions on Malawi.

This threat clearly violates the above-highlighted provision of the UN Charter and needs to be condemned in its totality if African countries deserve dignity and self-determination.