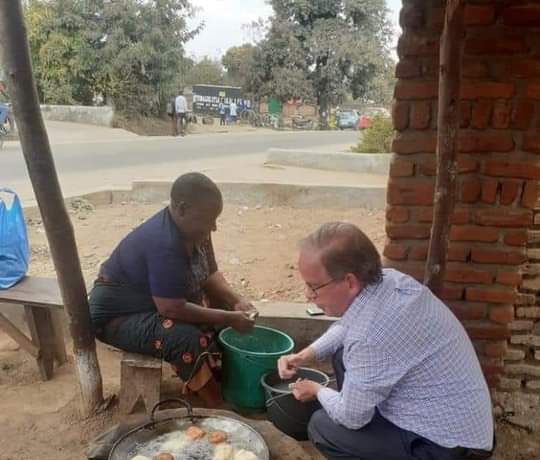 United States of America Ambassador to Malawi David Young seems to be making many friends amongst the locals due to his enthusiastic desire to discover what makes the country the Warm Heart of Africa.

Since his appointment and subsequent arrival in Lilongwe in April this year, Ambassador Young has been up and about including attending a Malawi National Team match against Ethiopia in June while wearing the full black-red-green Malawi colours.

Recently, the ever friendly Ambassador has been seen asking locals to give him fresh challenges as part of knowing more about his host country’s culture.

One of his many interests away from his busy diplomatic duties has been trying out Malawi’s local cuisine with some interesting suggestions being given to him.

Today the Ambassador visited area 18 A, deep in the capital city’s residential areas to taste out fried snacks which are popular amongst Malawians.

The ambassador took part in preparations of the tasty snacks and pictures of him which are circulating on social media have generated praise for humbling himself to support local small businesses through exposure among others.

On today’s adventure, the US Embassy in Lilongwe posted the Ambassador saying; “Based on your feedback and suggestions on what street food I should try, this week I visited Mrs. Margaret Makhuza in Area 18 A to try her delicious mandasi.  People in Lilongwe have enjoyed her treats for years and I can see why.  She even let me try my hand at making a few.  They are my new favorite treat!  Thank you Mai Makhuza.”

Reacting to this one user on Facebook commented; “Honestly I love this Ambassador David,  the way he associate with the locals is Just amazing, he loves Malawi. He is a humble man full of fun. Hope I will meet him one day.”

Another one on twitter chipped in by saying he is impressed with Ambassador Young’s humbleness calling it the best way to conduct diplomacy in a foreign country.

“I like Ambassador David Young. This guy is the epitome of diplomacy. He really gets his feet stuck in and firmly on the ground wherever he goes he is fully engaged. Saw him do the same with his previous station deployment in Zambia. The world needs more like him,” he posted.