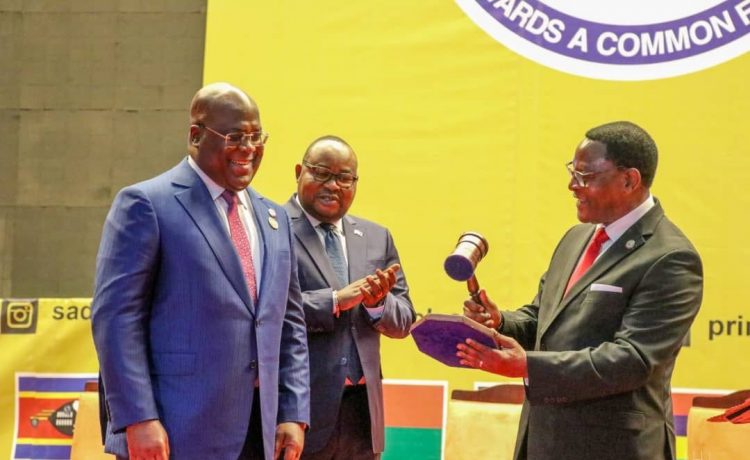 The two-day 42nd ordinary summit of heads of state and government of the Southern African Development Community (SADC) is expected to wind up tomorrow, Thursday, in the Democratic Republic of Congo (DRC).

The leadership of the regional bloc is rotational and Malawi took it last year. As such, Malawi’s Lazarus Chakwera will hand over the reins to the DRC’s president, Felix Tshisekedi.

Prior to his departure for Congo, Chakwera said his time at the helm of the SADC leadership has been a good challenge and that he leaves the leadership role a happy man after fulfilling his targets.

He took charge from Mozambique’s Filipe Nyusi, whose problems with insurgencies in the oil and gas-rich province of Cabo Delgado back home formed a major task on Chakwera’s to-do list.

Recent reports indicate that presence of SADC troops and Rwandan troops in Cabo Delgado province have achieved some important results. Some roads have been reopened, and a semblance of calm has returned in key locations for liquefied natural gas projects, such as Palma and Mocímboa da Praia.

Since July, some displaced population has since returned to their ruined settlements for rebuilding as attacks have relatively quelled although the United Nations Refugee Agency has said it would be premature to encourage displaced people to return to their homes as there are still attacks in some parts across the province.

Tshisekedi takes over the SADC leadership from Malawi’s Lazarus Chakwera, a few months after he joined the East African Community, another regional bloc.

In Democratic Republic of Congo, Tshisekedi is faced with terrorist acts in the eastern part of the country bordering with Rwanda. His government has been widely blamed for failing to contain the rebels while he accuses Rwanda of working with them.

His tenure as SADC chairperson coincides with him defending his presidency in next year’s general elections.

South African President, Cyril Ramaphosa, also handed over his chairmanship of the SADC organ on politics, defence and security cooperation.

Taking the bloc leadership amid Covid-19 devastation last year, president Chakwera bemoaned inequalities and disparities in accessing COVID-19 vaccines across the globe during his induction speech at the 41st Ordinary Summit of the SADC Heads of State held in Malawi capital, Lilongwe.

The new SADC Chair said the inequalities and disparities must be tackled head on as they are seriously hindering efforts to save the lives of millions in the SADC.

“I want to make a larger point to the rest of the global community: The inequalities and disparities we are seeing in the distribution and production of COVID-19 vaccines are symptomatic of an old geopolitical framework that is no longer working, no longer sustainable, and no longer acceptable,” said Chakwera.

Eventually, Covid-19 vaccine patent holders permitted SADC countries, among others to produce the vaccines using their formulae. South Africa and Botswana responded by rolling out Covid-19 manufacturing programmes and have remained the duo countries taking the lead in the larger part of Africa beyond SADC.

South Africa’s president, Ramaphosa, is one of the three signatories to a letter published in the international media that reads: “It is difficult to build a vaccine production unit, but it is even more difficult to ensure its sustainability.”

Malawi’s health minister, Nancy Tembo, who was the chairperson of the council of ministers, remarked that SADC should work on, “bolstering productive capacities in the face of the Covid-19 pandemic for inclusive sustainable economic and industrial transformation”.

The predominant theme for the SADC summit in Congo was Climate change. The SADC leaders held their meeting after the devastating Cyclone Gombe and tropical storm Batsirai, which affected parts of Madagascar, Mozambique, Malawi and Zimbabwe leading to the displacement of hundreds of thousands of people. South Africa also experienced a climate change-related disaster, in the form of floods and landslides in KwaZulu-Natal which destroyed property and life.

In wrapping up their two-days meeting tomorrow, the SADC leaders are expected to ratify agreements and protocols one of which is proposing SADC Mechanism for Engagement with Non-State Actors, particularly with regard to climate change and humanitarian assistance. 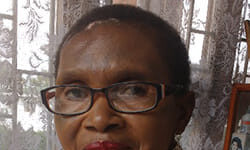