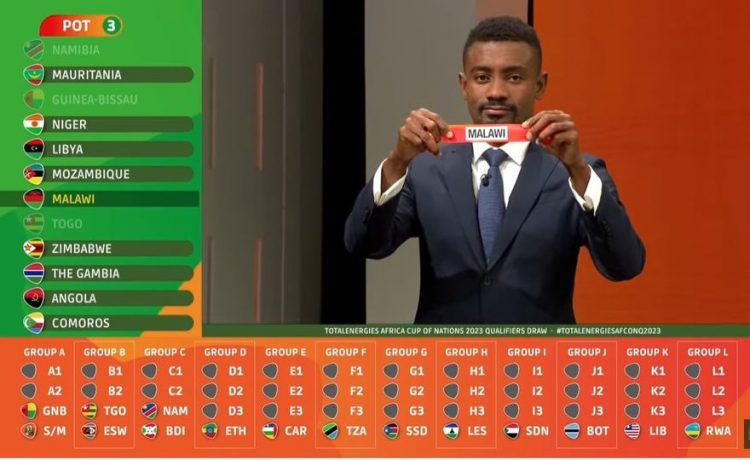 Malawi’s Flames  are drawn in Group D with Egypt, Guinea and Ethiopia in the Cote d’Ivoire 2023 Africa Cup of Nations (AFCON) qualifiers.

Looking at the opponents, Egypt are the highest FIFA ranked team at 32nd and 4th in Africa while Guinea are 80th on FIFA and 15th in Africa, Malawi are 120th ranking on FIFA and 31st in Africa and Ethiopia being the lowest ranked in the group, 140th on FIFA, 42nd in Africa.

The draw on paper seemingly shows Malawi will have to produce a miracle to be part of the top two teams in the group and rightly so if recent form and results are taken into account.

For instance, at the 2021 AFCON, the Flames were beaten by Guinea in the first game before collecting four points in their next two games on their way to the first ever round of 16 appearances, while at the same tournament Egypt reached the final only to lose to eventual winners Senegal via penalties.

But this draw could also be a big chance for Malawi’s fledgling squad and Romanian Coach Mario Marinica to continue their progress by brushing shoulders with some of the best players in Africa.

Playing against Egypt at home also gives football fans a chance to see in person one of the best footballers in the world at the moment, Liverpool’s Mohamed Salah.

The only obstacle here is if the Confederation of African Football (CAF) will by then have approved the Bingu National stadium as fit for use.

Previous qualifying campaigns have shown that utilizing home ground advantage in Africa is very achievable against any team.

Egypt and Guinea have all suffered famous defeats at Kamuzu Stadium against the Flames in the past.

At the same time Ethiopia despite being the lowest ranked also provide tricky fixtures both home and away, but managing to win both as well provides a good platform for Malawi to qualify.

Meanwhile speaking to the media before the draw, Flames Mentor Marinica said he is not afraid of any opponents as his charges are ready to match any team.

“I think it does not matter too much. Regardless of whom we face, we should believe in ourselves, work very hard, be disciplined and we will have our chances.

“Why should I be nervous? It is a joy of life. Sometimes the draw could turn sour, sometimes it could be okay and other times it could turn out to be amazing. But always you should not have regrets if you gave 100 percent.

“At Afcon, we had 14 local based players out of 28, the most any team had. Our squad transfer market value was 4.5 million euros. That has not changed,” Marinica was quoted Saying.