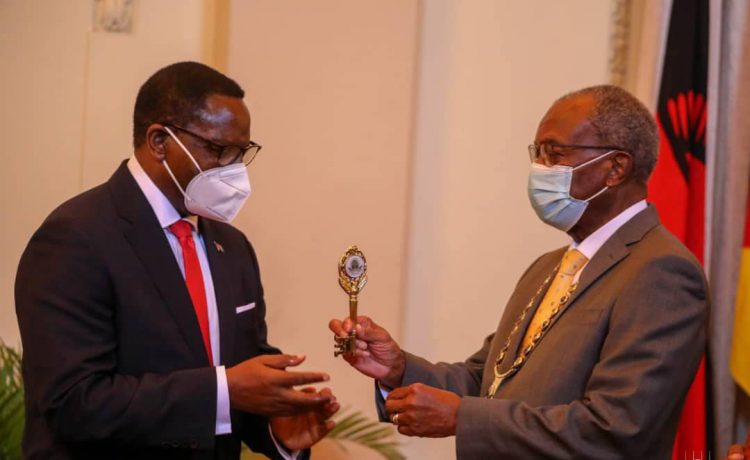 President Lazarus Chakwera on Friday evening was given keys to the City of Maputo, a symbolic gesture of declaring him an honorary citizen of the Mozambican Capital.

Maputo City Mayor His Worship Eneas Comiche handed over the key to the Malawi leader.

In his remarks after receiving the key, President Chakwera who was in company of his host President Felipe Jocinto Nyusi said the gesture came as a timely lesson as to how his administration intends to transform Malawi cities and make them modern, habitable and thriving commercial centres.

“Maputo is a model upon which we have a clear example of how to advance metropolis infrastructural development and socioeconomic growth.

He added there is also urgent need to establish thriving secondary cities as outlined in the Malawi Vision 2063.

“It is my administration’s goal to get our cities right because they are centers of distribution, delivery and diversity, making them a unique economy within the wider economy,” he said.

The Malawi leader later in evening also met Malawians who are currently living in Mozambique, whom he urged to make use of the bilateral relations between the two countries and meaningfully invest back home.

”The environment is now conducive because our bilateral relations are not just on paper. They mean more economic diplomacy that is mutual and beneficial. That is why the two countries are collaborating at a level such as security and trade,” he said.

Chairperson for Malawians Association in Mozambique Charlo Ng’ambi, applauded the current administration for the restoration of the cordial relationship between the two countries.