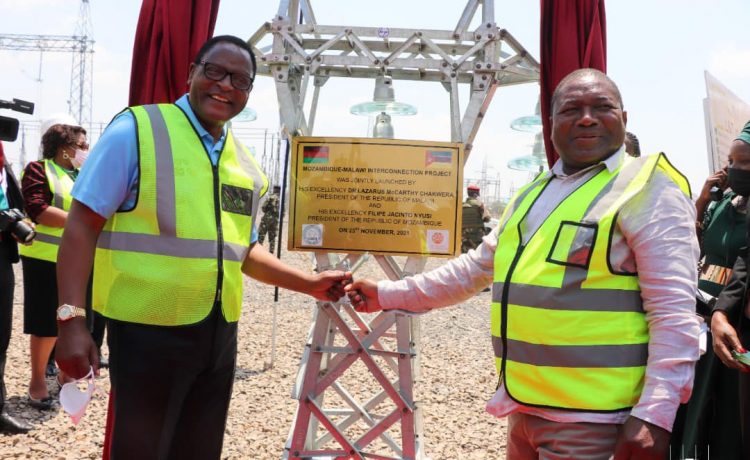 Malawi President, Lazarus McCarthy Chakwera, is today leaving for Mozambique for a four-day State visit where among other things he will preside over the launch of the Mozambique-Malawi Power Interconnector in Tete and visit the Nacala Port.

The President’s itinerary seeks to leverage and consolidate diplomatic ties in facilitating the key enablers in the power and trade sectors.

The Interconnector project is designed to connect Malawi to the Cahora Bassa power grid while the Nacala Port remains a key trade route through which Malawi transports key commodities including fuel and fertilizer.

The port, which is part of the Nacala Development Corridor, is the cheapest and shortest route to the ocean for Malawi as it is linked to a railway network up to Liwonde dry port.

Currently, Malawi uses the long and costly route of Tanzania to transport its imports, a reality economic experts view as exorbitantly unnecessary.

The state visit has also been touted as a strong indication that Malawi/Mozambique relationship which went sour during the Mutharika brothers (Bingu and Peter) administrations has now been revived and now on right track.

Malawi and Mozambique have had a sour relationship after an embarrassing stand-off during President Bingu Wa Mutharika’s time when Malawi was trying to find a direct route to the Indian Ocean through the Shire-Zambezi Waterway Project.

The project failed to take off as Mozambique could not cooperate to have the project launched. Mozambique was displeased with how Bingu cut corners and they showed disdain to the project by openly boycotting the launch of the Nsanje Inland Port in the presence of foreign Presidents, Zambia’s Rupiah Banda and Zimbabwe’s Robert Mugabe.

Authorities in Maputo ordered their military to deny access to a barge that was intended to sail upstream from the Indian Ocean via Zambezi River into Shire River.

The sour relationship hangover continued even when Bingu’s young brother, Peter Mutharika, took the reins of power in 2014. Throughout his presidency, Peter did not make attempts to visit the neighbouring country despite its economic importance to Malawi.

This is why Chakwera’s visit has attracted acclaim from both his supporters and critics in equal measure.

Social media critic, Joshua Chisa Mbele, has applauded the President for undertaking what he called a critical State Visit with the potential to bail out Malawi from its economic problems.

Besides SADC meetings, President Chakwera last paid a solidarity visit to Mozambique in 2020 where he also held bilateral talks with his counterpart President Filipe Nyusi in Songo town.

It was during this trip that he appreciated Cahora Bassa hydro power dam from where the interconnection project emanates.

President Nyusi visited Malawi last November, a trip which saw the two leaders switching on the interconnection project at Phombeya Substation in Balaka where the grids of the two countries will connect. The transmission lines will be 142km from Matambo substation and 76km into Malawi to Phombeya.