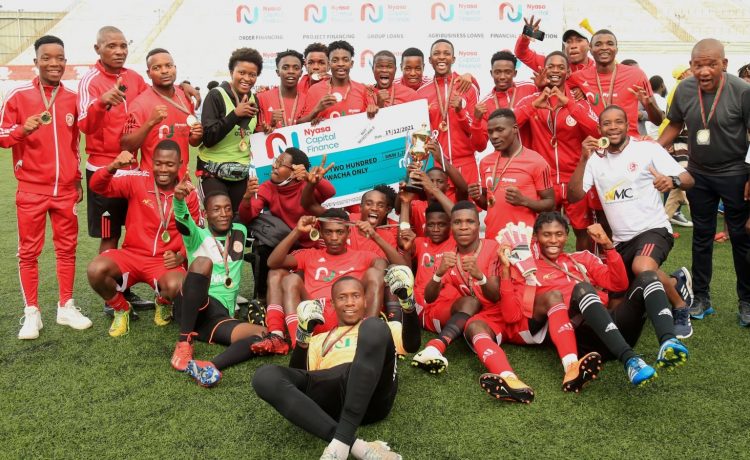 Nyasa Big Bullets Reserves are champions of the Nyasa Capital Finance Cup after thumping The Boyz 0-3 at Kamuzu Stadium on Sunday.

This is a third trophy for Bullets in a row as they also won the ThumbsUp Southern Region Football League and the Powertex Top 8.

Both teams lacked a spark in the field due to a heavy downpour just hours before kick-off.

But a brilliant second-half performance from Enos Chatama’s boys sealed the victory, with Patrick Mwaungulu, Chikumbutso Salima and Chimwemwe Yassin scoring in the final 20 minutes for the young Bullets to complete a treble this season.

Speaking after the match, Chatama hailed his boys for the win, but was quick to admit that his opponents gave his side a tough run, especially in the first half.

“We knew that they would come hard on us by packing the bus no wonder we failed to score [in the first half], but we had a game plan where we reserved some players, who, after being introduced in the second half changed the complexion of the game,” he said in a post-match interview.

“It’s good that we have won the cup in front of our fans after struggling in the opening half,” added Chatama.

The team is also in the semis of the Aubrey Dimba Trophy being played in Mchinji where it is expected to travel this coming weekend to face Kamuzu Barracks Youth. The winner will take on Silver Reserves, who beat Bright Stars of Mzuzu in the first semi-final on Sunday.