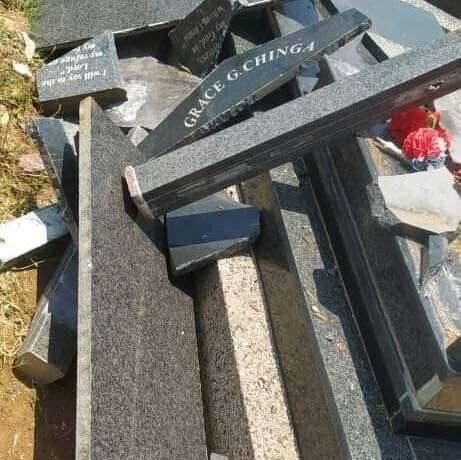 Tombstone for the late gospel icon Grace Chinga has been vandalized at HHI cemetery in Blantyre by unknown people.

It is believed that the incident occurred on the night of the 21st October, 2021.

According to a Facebook post made by late Chinga’s son, Steve, the reasons why the tombstone has been demolished are yet to be known.

Steve however questioned the whereabouts of the cemetery guards during the occurrence of the incident.

“Breaking something as hard as a tombstone requires a lot of muscle, and definitely there has to be some sound when breaking it, am just curious if the guards didn’t hear anything”, Said Steve.

Grace Chinga remains a prominent name in the gospel music industry dating back from the “Uleke” era in the early 2000s.

The songstress, who had complained for headache and later fainted, was pronounced dead on arrival at Queen Elizabeth Central Hospital in Blantyre.

The singer famed for the hit ‘Thandizo Langa,’ which was voted the Best Song during the Malawi Broadcasting Corporation (MBC) Entertainers of the Year.