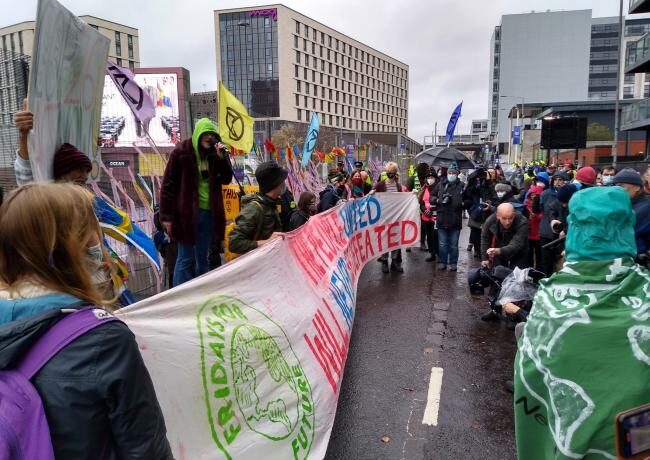 Thousands of people took to the streets of Glasgow, Scotland on Friday, raising their voices to call for more action on climate change. The protesters said they have been disappointed with the promises made at the COP26 United Nations climate change conference.

Protesters came from around the world to demand that leaders do more to ditch fossil fuels and cut greenhouse gas emissions to limit global warming. Many of them have grown up personally experiencing the dangerous effects of climate change, and they’re worried about their futures.

“COP26 is full of false solutions, and we need to make sure they’re integrating real solutions, because we just don’t have much time,” 23-year-old protesters Rebecca Richie, from California, told CBS News.

“We’re out of time. We’re in a climate emergency right now.”

The protest on Friday was part of a global movement that grew out of solitary school strikes launched by Swedish climate activist Greta Thunberg three years ago. It came at the end of the first week of the COP26 summit, where many countries have made promises to phase out coal and curb deforestation.

Thunberg addressed the crowd on Friday, saying that “immediate and drastic” cuts to emissions were needed.

“The people in power can continue to live in their bubble filled with their fantasies, like eternal growth on a finite planet and technological solutions that will suddenly appear seemingly out of nowhere and will erase all of these crises just like that,” Thunberg said. “All this while the world is literally burning, on fire, and while the people living on the front lines are still bearing the brunt of the climate crisis.”

The International Energy Agency announced on Thursday that pledges made by governments to cut carbon and methane emissions could limit global warming to 1.8 degrees Celsius, or just over 3 degrees Fahrenheit, this century.

But that prediction relies on countries and companies following through on their promises to cut emissions in the decades to come, and many activists on Friday said they’ve seen similar promises broken before.

“What is a promise if there’s no action behind it?” Richie, the protester from California, told CBS News. “These promises have become even more empty and meaningless exactly when they need to become more meaningful and powerful and true.”

“It is not a secret that COP26 is a failure,” Thunberg said. “It should be obvious that we cannot solve a crisis with the same methods that got us into it in the first place.”

An even bigger rally is set to take place on Saturday, with around 100,000 demonstrators expected to hit the streets in Glasgow.