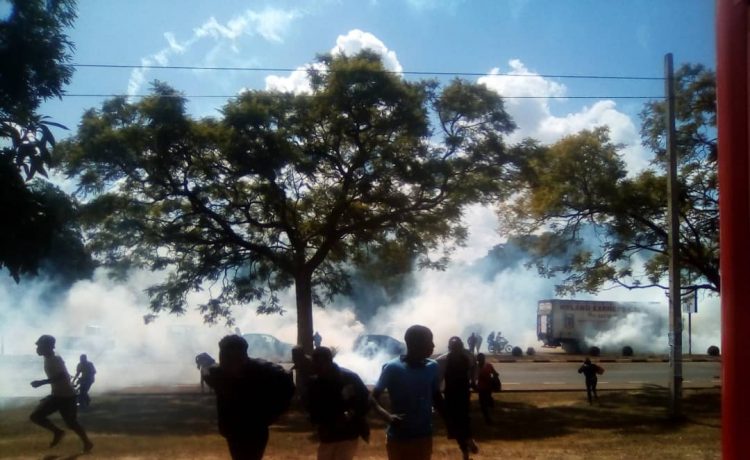 Police in Lilongwe has scattered a group of demonstrators with teargas. The group, which is being led by a known Democratic Progressive Party (DPP) youth, Ledson Munlo, and three others belonging to the DPP has been conducting vigils in Lilongwe aimed at forcing the President to fire the Anti-Corruption Bureau (ACB) Director General, Martha Chizuma.

The President has, however, remained non-responsive to their demands rendering their vigil, which began on Friday, 20th May 2022, hopeless.

Noting that their vigil is turning into a fruitless expedition, the grouping, which is going by the umbrella name of Concerned Citizens, gathered at Kamuzu Mausoleum this morning from where they embarked on a journey to allegedly close the ACB offices until Chizuma is forced out.

Their attempt to close the ACB offices has, however, met resistance of the police who scattered them with teargas firing and chase, causing their second attempted strategy to hit a smoky snag.

Reports emerged that the leaders involved in this vigil began scrambling for sharing of funding resources in which the other two, namely Agape Khombe and Fredrick Billy Malata, accused Munlo of shortchanging his colleagues on the funds appropriation.

Unverified rumours are informing that the grouping is receiving funding from Sattar agents who have an interest in seeing Chizuma out of the ACB.

Further unverified information has been received by Shire Times indicating that there is no promise for continued funding towards the cause owing to the fate that Sattar has encountered in London court in which his bail relaxing application has hit a blank wall.

Government Spokesperson has, this morning, warned the grouping against lawlessness saying nasty consequences may fall on them through the hand of the law.