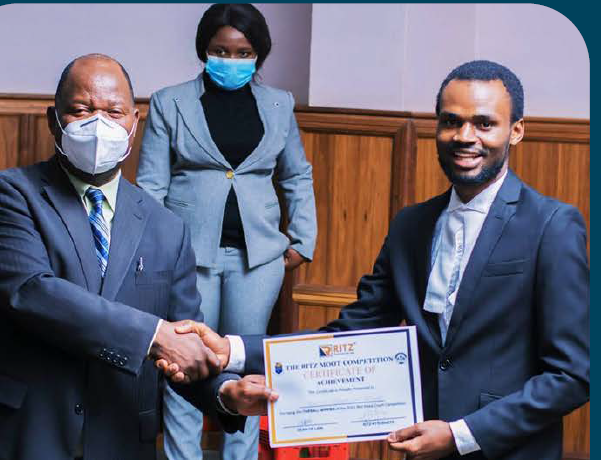 The final contest for the Ritz Moot Court competition was characterized by superb organization and excellent performance by the four contestants. For starters, mooting is a competition in which law students argue against each other in a mock hearing in front of a judge(s) who decides at the end who’s won. This is where lawyering skills are honed in the current competency-based system of the study of law at university of Malawi.

The High Court (commercial division) was luminous and well decorated. The moot men who were accommodated at Armyrius Hotel in Blantyre on the eve of the final showdown were visibly in good spirits, busy making notes to impress the Judge.  The presence of students in gorgeous suits who had traveled all the way from Zomba to witness the hypothetical litigation battle added another dimension of flavor to the event. The two teams, comprising Chifuniro Chaponda, Daniel Sato, Precious Kalulu, and Bentry Nyondo, were visibly eager to tussle it out. As the clock indicated 03:00 pm, the court was in session presided by Judge Dr. Michael Mtambo, that Judge who decided the law of contract locus classicus case of Dr Joseph Chidanti Malunga vs Fintec Consultants and Bua Consulting Engineers, High Court (Commercial Case no 6 of 2008).

It was a tight contest as both sides demonstrated excellent performance. Chaponda and Sato represented the claimant. The ingenuity and thoroughness in the presentation of the case left the court visually perplexed. The claimant based their case on the doctrine of substantial performance.

Then it was time for Kalulu and Nyondo to convince the court to set aside the claimant’s case.  The level of research and eloquence defined the defendant’s submissions. After the submissions, the audience was left debating as to who had carried the day.

Despite the tight contest, the court had to determine the overall winner for the inaugural competition. The auditorium was in dead silence. It was Nyondo who emerged the overall winner after amassing 85 points on the score sheet. This was Nyondo’s second accolade in a row within a space of ten months. The top moot man returned to Chirunga campus MK120, 000 richer and was also promised an internship placement at Ritz Attorneys at Law. As runners-up, Sato walked away with MK80, 000 on the second position; MK60, 000 and MK40, 000 for Precious Paul Kalulu and Chifuniro Chaponda respectively. The best oralist, Catherine Chimoyo, walked away with MK10, 000.

In his remarks, the presiding judge, Dr. Michael Mtambo expressed satisfaction with the performance of the students. He said the submissions were at a higher level which demonstrated that the contestants prepared for the competition.

“I’m very happy with the way you have argued your case. This shows that we have a good future in upcoming lawyers. As such, let many students take part in this competition so that you should gain litigation and argumentation skills”.  However, the judge bemoaned the absence of females among the finalists.

“The competition has come to stay and there is no backing out,” he said.

On his part Nyondo admitted that he was under immense pressure going into the finals of the competition.

“Honestly speaking, I was under so much pressure. Before the competition started, Joy-P (my mother) told me that I am the best and that I would win,” said Nyondo.

Being on the bill board as the Ambassador of the competition also increased the pressure because I thought it was going to be frustrating for me to lose.

Nyondo after emerging tops said was “very glad but not excited” that he won the competition.

“I was very glad, but not excited that I won. I think my senior and noble friend, Mr. Lonjezo Kachingwe, best summarizes my reaction when he told me that it is not the winning that was most pivotal but the capacity to demonstrate consistency of my potency,” said Nyondo.

The upcoming legal advocate concluded by paying tribute to his partner Kalulu.

“More importantly, I am most indebted to my senior Mr. Precious Kalulu-a moot guru who was my partner. Indeed he (as Lead Counsel) led me so well in and outside the Court Room.” The immediate past president of the SLS, Chikhulupilira Zidana, whose leadership gave birth to this competition, thanked Ritz Attorneys for its unfathomable gesture to sponsor the prestigious competition.