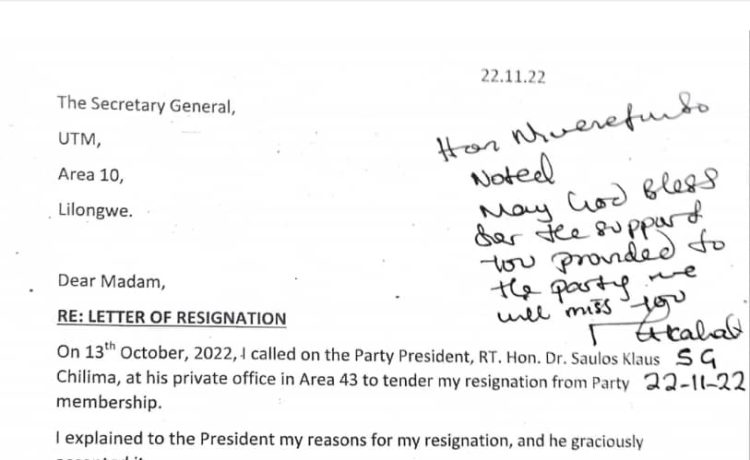 Frank Tumpale Mwenefumbo has, today, tendered his resignation both as Spokesperson and member of UTM.

In his letter addressed to the UTM Secretary General, Mwenefumbo has claimed that he was supposed to announce his resignation in October, but only delayed to do so because he was feeling sympathetic to the party because the wife to the UTM leader, Mery Chilima, had been sick.

“On 13th October, 2022, I called on the party president, Rt. Hon. Dr. Saulos Klaus Chilima, at his private office in Area 43 to tender my resignation from the party membership. I explained to the president my reason for my resignation, and he graciously accepted it. In my own consideration, I delayed to announce the resignation on ethical and moral reasons due to the illness of the 2nd Lady,” reads the resignation letter in part.

Mwenefumbo conceals the reasons for his resignation with a claim that “I intend to live a private life and concentrate on my businesses and farming at the village. I also do not, at the moment, intent to join any political party or participate in any political activity,” he says.

Mwenefumbo’s resignation comes hot on the heels of fragmentation of UTM’s ‘ground forces’ who defended the party on social media, saying the party leadership is engulfed in selfish design, saying it is unappreciative to their efforts. 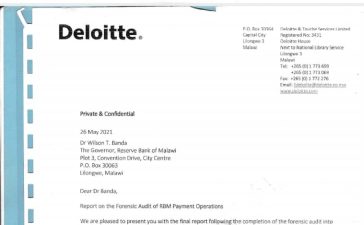